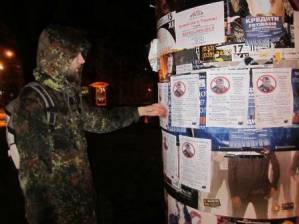 Two activists from the Vidsich moment were detained early Tuesday morning for posting leaflets against the controversial new head of the Lviv Regional State Administration, Oleh Salo.  A representative of the movement, Khrystyna Hrunyk said that the police had said openly that they were being detained for protesting against the newly-appointed governor.

The two activists say that the four officers refused to show ID, then soon called an investigative team.  The activists were held for three hours.  Hrynyk says that she was told that they would not be released until an order was received from above.

In the end an administrative offence protocol was drawn up, with the relevant offence carrying a fine of 51 UAH (around 5 EUR).

President Yanukovych’s appointment of Police General Oleh Salo as Lviv regional governor two weeks ago angered many, especially in the oblast.  Salo was for some time on the wanted list over alleged involvement in election fraud during the 2004 elections.   The news of the appointment two weeks ago was met with shouts of “shame!” from journalists who associate his period as head of police with pressure on the media. Lviv small business owners have also accused him of being behind politically motivated pressure by the tax police and law enforcement bodies generally.

Since Salo’s appointment is viewed by many commentators as preparation for the 2015 presidential elections.  (See The President’s Staffing Criteria)