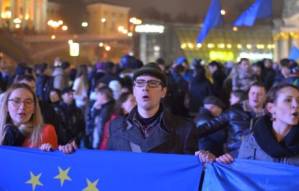 People have begun gathering on Kyiv’s Maidan Nezalezhnosti [Independence Square] in protest at the decision announced earlier in the day to suspend all work on preparing for the EU-Ukraine Association Agreement.  Messages were posted on social networks calling on people to gather from 22.30 and bring warm clothes, umbrellas and food.

Several opposition politicians have promised to attend without party flags.

Ukrainska Pravda reports that as of shortly after midnight there were around 1500 protesters. 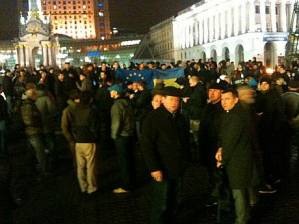 As reported, Prime Minister Azarov signed a directive on Thursday which states that Ukraine is suspending preparations for signing the Association Agreement.

The news came only an hour or so after the ruling Party of the Regions had again failed to support any of the seven bills aimed at enabling imprisoned opposition leader and former Prime Minister Yulia Tymoshenko to receive medical treatment abroad.  This was one of the conditions for the EU-Ukraine Association Agreement and widely believed to be a major stumbling block  for Yanukovych who narrowly beat Tymoshenko in the last presidential elections.