Attempts to restrict protest on Maidan 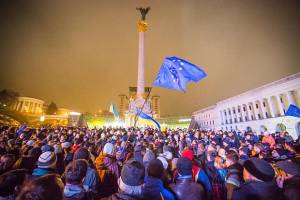 The Kyiv City State Administration [KCSA] has announced that the protest on Maidan Nezalezhnosti [Independence Square] over the government’s ditching of EU-Ukraine Association plans can continue, however without tents.  This follows a ruling obligingly provided by the District Administrative Court in Kyiv from Nov 22 to Jan 7, 2014.   The restriction applies to Maidan Nezalezhnosti, Khreshchatyk and European Square.

By around midnight on Thursday some 1500 people had gathered to express their support for European integration and their anger over the government’s about-face.

Today is the ninth anniversary of the Orange Revolution during which millions defended their democratic choice of candidate in the presidential elections around the clock.  Tents were not then banned.

Information and the photos from Ukrainska Pravda