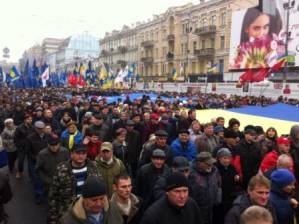 According to Hromadskie.tv who cite unofficial police estimates, by 12.50 there were more than 100 thousand people on the march “For European Ukraine” which is proceeding from Maidan [Nezalezhnosti] towards European Square where a rally in support of European integration was scheduled for 13.00.

Protests are also taking place in most other cities in Ukraine as well as other countries following the government’s announcement on Nov 21 that it was suspending preparations for the signing of the EU-Ukraine Association Agreement.  This came an hour or so after the pro-presidential Party of the Regions defeated all bills in parliament aimed at enabling imprisoned opposition leader and former Prime Minister Yulia Tymoshenko to leave for medical treatment abroad. 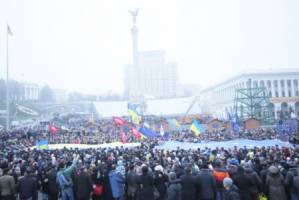