Odessa EuroMaidan: Heavy-handed measures by police and their questionable back-up 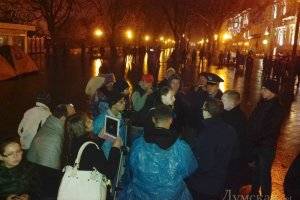 The police in Odessa have forcibly removed the tents erected on Prymorsky Boulevard by protesters.  The police action began at around 5.20 a.m.   The protest had by that stage ended and the demonstrators were apparently gathering up the tents where they were surrounded by around 120 police officers.

The move came after the District Administrative Court at 2 a.m. issued yet another court ban, this time restricting citizens’ right to peaceful assembly until New Year.  The court ruling places a blanket ban on all demonstrations, the use of tents, sound equipment and vehicles until the end of the year.

The court order was read out, and although the organizer of the picket, Kyril Filimonov explained that they were dismantling the tents, the police brought in several dozen people, probably down-and-outs, who began destroying the tents. They were especially antagonistic towards journalists filming what was going on.  They tried to grab their equipment, and even hit them, unperturbed by the presence of the police officers.  What remained of the tents was put on a GAZel vehicle without number plates and taken away.  No official record of what was being removed was provided.

The police detained three of the protesters, including the leader of the Odessa branch of Democratic Alliance, Alexei Chorny.

The website Dumskaya.net reports that according to information they have received, all three were beaten up in the vehicle and then taken to the Portofrankovsk Police Station without their arrival being recorded.

Visibility is not good, but the report above is substantiated by the video footage here: