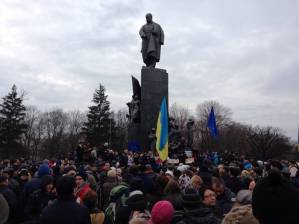 Kharkiv’s Mayor Hennady Kernes has issued an entirely illegal directive banning all mass events in Kharkiv as an obvious attempt to put an end to the Euromaidan demonstration protesting against the government’s about-face on the EU-Ukraine Association Agreement.  The directive, dated 22 November 2013,  claims to be in connection with the number of flu cases in the city.  It is an entirely meaningless document, since a court order is needed to ban meetings.

Unfortunately, it is likely that the city authorities will not be slow in applying for such a ban.