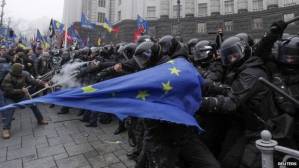 Some of the confrontation which is now being investigated occurred around the same time that unidentified individuals, some of fairly specific appearance, were being sent off in procession from outside the President’s Administration

The Kyiv Prosecutor’s Office has issued a statement that the “actions of rally participants, as well as complaints against police officers, will receive a legal assessment”

As of 25 November the statement continues, the law enforcement bodies have received 16 reports alleging criminal offences during the events in the centre of Kyiv.

The first cases they cite are of alleged offences by protesters.

They say that during the protest near the Cabinet of Ministers building on Nov 24 several smoke bombs and objects were thrown in the direction of the police and teargas was applied. Furthermore, some participants, trying to push out the police officers and burst into the Government building, broke down the barrier which inflicted material losses on the state”.

The statement says that criminal investigations have been initiated under the articles of the Criminal Code for resistance to police officers and hooliganism.

There have been suggestions that the conflict which undoubtedly arose (with teargas also used by the Berkut officers) was linked with a vehicle, apparently empty, being driven into the area and protesters being forced back.

Please also see Planning provocation?  and the video link given there (knowledge of language is not required!).

The statement also says that an investigation is underway into alleged use of force by rally participants in “obstructing enforcement of the ruling of the Kyiv District Administrative Court banning the use of small architectural forms (tents) in the centre of the city”.

This ban, issued on the application of the Kyiv City State Administration on 21 November 2013 is one of a number being used by courts throughout Ukraine to restrict the right of peaceful assembly.

A criminal investigation has also been initiated on the report by MP Andriy Parubiy that police officers caused him injuries on Sunday night.

A check is being carried out of reports in the media about possible obstruction of some journalists during the rallies, as well as over the false claim that a bomb had been placed in a plane.