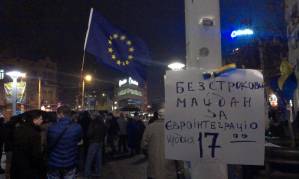 Clear signs of close coordination between the police, the city authorities and a gang of thugs probably paid to beat up peaceful demonstrators protesting against the government's about-face on European integration

During the early hours of Tuesday morning around 40 “sportsmen”-thugs attacked the 25 people on the Dnipropetrovsk EuroMaidan protesting against the decision by Ukraine’s leaders to ditch moves towards signing the EU-Ukraine Association Agreement.

One of the organizers, Viktor Romanenko says that a court order banning the protest on European Square had just been read out by an official from the Dnipropetrovsk City Council, with a police officer standing nearby. By that moment all other police officers who had been posted around the square got into their cars and left.

At that moment the thugs attacked and began destroying tents, knocking the protesters down and kicking them.

Five of the peaceful protesters were beaten unconscious and taken by ambulance to hospital.

The thugs sped off, and immediately afterwards the police appeared.  Nobody was detained.

Video footage available here: http://dnepr.comments.ua/news/2013/11/25/233149.html shows a person named as Alexander Svirenko, head of the City Council’s department for liaising with the police, watching the events from the sidelines.

Viktor Romanenko says that they plan to continue their protest after submitting the necessary notification to the authority.

“Obliging courts, hired thugs are all part of the techniques developed by the authorities. We do not intend to give up, and will continue to stand up for our principles”, Romanenko says.

The use of bodybuilding thugs gained publicity after Vadim Titushko was captured on video on May 18 this year beating up a woman journalist, Olha Snitsarchuk and her photographer husband, Vlad Sodel.  The police stood and watched, refusing to intervene.  The thugs had been hired to “protect” the Party of the Regions so-called “antifascist” demonstration (see: Dangerous Antifascist Card).