“Associate me with the EU, not with Yanukovych’s regime” 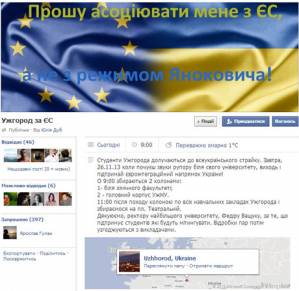 The request in the title and picture was just one of the memorable banners produced by the thousands of students who demonstrated their support for European integration on Shevchenko Square.  Together with tens of thousands of Ukrainians, they were protesting over the government’s decision announced on Nov. 21 to suspend preparations for the EU-Ukraine Association Agreement.

Radio Svoboda reports that on Tuesday morning around 1500 students from Kyiv Mohyla Academy marched in file towards the Taras Shevchenko National University where they were greeted by students from other universities.

It was Kyiv Mohyla students who first announced a strike, elected a strike committee and cancelled all lectures until Monday, 2 December.

Strikes have also been announced by the Uzhhorod National University and institutes in Ivano-Frankivsk and Lviv.

As reported, the deans and vice-deans of all Lviv higher education institutes met on Nov 23 and drew up a statement of support for students 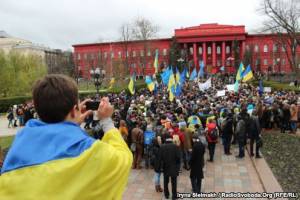