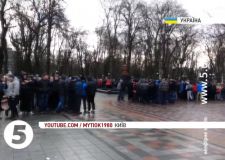 In the second attack on journalists today, thugs in Mariyinsky Park have attacked a Channel 5 film crew with sticks and stone.  The channel says that there are a few hundred of these thugs in the park, and no police to be seen.

Channel 5 is presently seeking comment from the Kyiv Police regarding the incident.

As reported, people brought in by the Party of the Regions are gathering on European Square for a pro-government rally.  There are a large number of athletic types, often hired as “guards” or for other purposes, in Mariynsky Park.