US warns of consequences if EuroMaidan dispersed

With fears rising through Friday following the appearance of thousands of paid thugs and huge contingents of Berkut riot police, the US Ambassador in Kyiv has warned that dispersal of the peaceful pro-European integration protest will adversely affect US-Ukrainian relations.

US Ambassador Geoffrey Pyatt was speaking on the Ukrainian Service of Voice of America.  He stressed that for the USA freedom of speech and press freedom were fundamental principles, and stated that the Ukrainian government had been informed of the US position.

“We explained very clearly, both publicly and in person, that the demonstrations which have been taking place this week are a positive thing demonstrating the strength of democracy in Ukraine and it needs to be respected”.  He added that it was positive that President Yanukovych’s Administration had not allowed serious demonstrations of violence and it was important for this to continue. 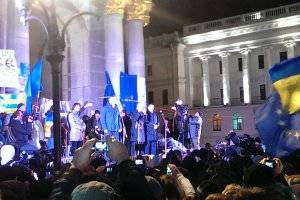 Both Ukrainian Internet publications and the western media have reported events throughout the day which raised fears that a violent dispersal of the huge crowd on Kyiv’s Maidan Nezalezhnosti [Independence Square] might be imminent.

Thousands of paid thugs appeared in the centre and there were two flagrant attacks on journalists (see below).

The Delegation of the EU to Ukraine also indicated their concern with the Delegation’s website stating:

“The EU Delegation deeply regrets the violent attack against journalists and other violent actions that were reported this morning. The EU Delegation will follow with great attention the results of the police investigation, and hopes that the culprits of these acts will be brought to justice.”