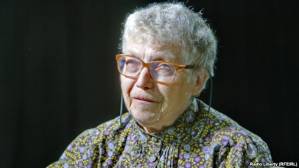 Natalya Gorbanevskaya, poet, former Soviet dissident and untiring advocate of human rights, has died in Paris.  She was 77.

She took part in the protest on 25 August 1968 in the middle of Red Square against the Soviet invasion of Czechoslovakia.  She was arrested in December 1969 and in April 1970 was diagnosed with the notorious invention of Soviet punitive psychiatry “sluggish schizophrenia”  («вялотекущая шизофрения») and underwent forcible “treatment” in a psychiatric hospital until February 1972.

Natalya Gorbanevskaya lived in France from 1975, working for the émigré journal Kontinent, then Russaya Mysl, as well as freelance for Radio Svoboda.

She was also renowned as a translator, and was on the editorial board of the Polish Russian-language journal Novaya Polsha.