US warns of consequences if EuroMaidan dispersedThugs attack Channel 5 film crew near pro-government rallyHromadskie.tv journalists beaten up in centre of KyivNo will to investigate harassment of journalistsNew political season brings journalists increased threats and intimidationCases of censorship and obstruction tripleTitushko and fellow assailants receive suspended sentencesAssaulted journalists angered by whitewashing of passive police officersOutrage and police excuses over Berkut violence against journalistBerkut riot police disperse peaceful protest on Independence SquareMore Clashes with police and protesters’ versions differing radicallyVradiyivka: Rule of Force rather than Rule of LawSecond police officer detained in connection with brutal Vradiyivka rapeVradiyivka residents storm police station after rape of young womanPolice officer gets long sentence for raping detaineePolice officers accused of torturing a detainee still at workSix former police officers sentenced over the killing of a detaineeNine prosecutions over the death of a detainee passed to the courtProsecutions over the death of a detainee in PrylukyHead of a Regional Department for Fighting Organized Crime dismissed over the death of a detainee
• Topics / Politics and human rights
• Topics / Freedom of peaceful assembly 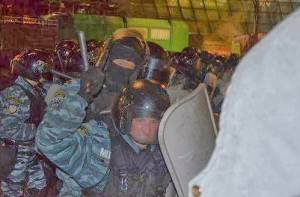 Over the last week those in power have proved willing to use hired thugs to provoke trouble in a crowded peaceful rally attended by children. They have now violently dispersed a peaceful protest, indicating that they are incapable of understanding any other language but that of sanctions

As feared, it appears that Berkut riot police have used force to disperse the peaceful demonstration on Maidan Nezalezhnosti in support of European integration.

Ukrainska Pravda cites MP Andriy Shevchenko as saying that EuroMaidan was brutally dispersed.  He asserts that dozens have been injured, dozens detained. He says that Berkut stormed around 4 a.m.  At 5 a.m (minutes ago). he tweeted that mobile contact is still down.

LigaBusinessInform reports that at 4.15 there were around a thousand protesters. Witnesses report that the young people, including women who had stayed through the night were beaten with batons, dragged to the ground and kicked.

All were pushed off the square.  There are reports that people were injured and arrested, and blood can be seen.

In a particularly grotesque move, while Berkut occupied the entire perimeter of the square, others began erecting the New Year tree.

All of this comes only hours after a clear warning from the US Ambassador in Ukraine that use of force against peaceful protesters would have serious consequences for US-Ukrainian relations and a statement of concern from the EU Delegation to Ukraine.

And the morning after the abortive Vilnius Summit at which President Yanukovych ignored the clear choice of more than half Ukraine’s population, and all attempts to find some form of compromise and keep the way open for the EU-Ukraine Association Agreement to be signed.

There have been suggestions  that sanctions should be applied to Ukraine’s leaders.  Over the last week, first on November 24, then on Friday,  those in power have proved willing to use hired thugs to provoke trouble in a crowded peaceful rally attended by children and young people.  This latest heavy-handed and violent dispersal of peaceful protesters is yet further indication that the present regime is incapable of understanding any other language. 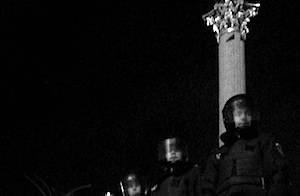