Berkut violently breaks up EuroMaidanUS warns of consequences if EuroMaidan dispersedThugs attack Channel 5 film crew near pro-government rallyHromadskie.tv journalists beaten up in centre of KyivNo will to investigate harassment of journalistsNew political season brings journalists increased threats and intimidationCases of censorship and obstruction tripleTitushko and fellow assailants receive suspended sentencesAssaulted journalists angered by whitewashing of passive police officersOutrage and police excuses over Berkut violence against journalistBerkut riot police disperse peaceful protest on Independence SquareMore Clashes with police and protesters’ versions differing radicallyVradiyivka: Rule of Force rather than Rule of LawSecond police officer detained in connection with brutal Vradiyivka rapeVradiyivka residents storm police station after rape of young womanPolice officer gets long sentence for raping detaineePolice officers accused of torturing a detainee still at workSix former police officers sentenced over the killing of a detaineeNine prosecutions over the death of a detainee passed to the courtProsecutions over the death of a detainee in Pryluky
• Topics / Politics and human rights
• Topics / Freedom of peaceful assembly 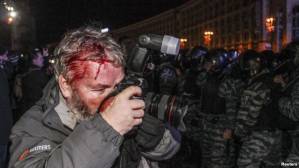 The violent dispersal of EuroMaidan came almost 3 years to the day that similar action was taken against the Tax Code Maidan.  There are other worrying parallels, including people remanded in custody on dubious grounds in a clear attempt to warn others of likely consequences of peaceful protest.  Judging by the outrage this time, Ukraine’s leaders have badly miscalculated.  A rally is planned for Sunday, Dec 1 and it is likely to be huge.

According to the Kyiv emergency medical centre 35 people have sought medical treatment following the violent offensive by the police against peaceful protesters on Maidan Nezalezhnosti at 4 a.m. on Saturday morning.  7 were hospitalized.

These figures may well not represent the real number of people injured.  Witnesses and the photos now available indicate that the police stormed the square, brutally beating people with their truncheons.  They were confronting entirely peaceful demonstrators, the hundreds who had remained on the square after the huge demonstrations in support of European integration.  Many sought refuge from Berkut in the Mykhailivsky (St Michael) Monastery and Cathedral

At least 33 people were detained.  Civic organizations are presently mobilizing to provide those detained or who suffered as a result of the gratuitous violence with legal assistance.  The Ukrainian Helsinki Human Rights Union has demanded the president’s impeachment and dismissal of the government.  The International Renaissance Foundation has announced that it is stopping all collaboration with the president, his administration and the cabinet of ministers.  In a joint statement, the Congress of National Communities of Ukraine and Association of Jewish Organizations and Communities [VAAD] speak of the "Real Prospect of a return to totalitarian days"

The expressions of "shock" and "outrage" from prime minister Azarov and others are impossible to take seriously.  So too are police attempts at justifying the actions.  A police spokesperson, Olha Bilyk asserted on Channel 5 that municipal workers had “asked the police to provide unimpeded access with technology for further preparations for New Year festivities.  As already reported, the New Year tree was erected after Berkut riot police dispersed the protesters and surrounded the square.

Bilyk claimed that despite repeated warnings, protesters “began throwing rubbish and some kind of burning items at police officers" and that they therefore decided to move the protesters from Maidan Nezalezhnosti”

None of this explains:

the huge contingents of Berkut riot police being brought into the centre of Kyiv throughout Friday;

the thousands of individuals, likely to have been paid thugs, who were lined up in, for example, Mariyinsky Park from Friday morning, and who attacked journalists from Hromadskie.tv and Channel 5;

It was the clear preparations underway which prompted the warning on Friday evening by US Ambassador Pyatt of the adverse consequences for US-Ukrainian relations if the peaceful protest was dispersed by force.

The warning, as well as statements from the EU, was ignored, and pretence that protesters were somehow obstructing New Year preparations will not wash.

They have also been tried before.  The violent measures taken against peaceful protesters have shocked people coming immediately after the Vilnius Summit.

They should not have surprised anybody, since they are eerily similar to the violent dispersal almost exactly three years ago of Tax Code Maidan protesters from the same square, and on the same pretext of erecting a New Year tree.

Over the following year a number of the protesters (as well as one or two people who were provably not there) were remanded in custody for long periods and faced grotesquely absurd criminal charges.

Another protester from Nov 24 was detained last night before the dispersal.  There are already two other protesters remanded in custody.  The police spokeswoman claimed that the 35 people detained will be released after questioning.  This remains to be seen.

Three years ago, the law enforcement bodies used violent measures to disperse peaceful protesters, and then far-fetched criminal charges (including of damaging the granite stone on Maidan Nezalezhnosti).  The aim then was clearly to crush peaceful protest and send a clear message of what protesters could face.

The same tactics were applied through the use of unidentified athletic types both on Nov 24, and on Nov 28.  Such huge contingents of thugs, and later of riot police did not happen without prior planning.  There was, in fact, no attempt at secrecy at all, suggesting that a major objective has been to intimidate and silence protest.

The attempt may have backfired however the wave of anger now may not be enough if firm measures, including sanctions, are not taken now.