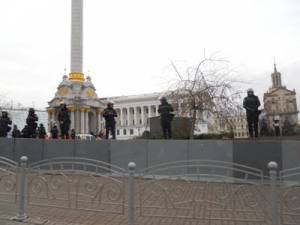 The International Renaissance Foundation [IRL] has issued a statement regarding the bloody dispersing of the peaceful EuroMaidan in Kyiv on Nov 30.  They say that the peaceful protest on EuroMaidan was about many thousands of Ukrainians supporting Ukraine’s European choice, their belief that the EU-Ukraine Association Agreement needed to be signed following the suspension by the government of preparations for its signing at the Eastern Partnership Summit in Vilnius.

They stress that EuroMaidan was an entirely peaceful gathering of an extremely large gathering of concerned citizens, members of civic organizations, young people and students,   The initiative of a group of civic activists was supported by people throughout the country, and became known throughout Ukraine and internationally as EuroMaidan.  It was a democratic protest which to the last distanced itself from any political parties or movements.

IRF stresses that there were absolutely no legal grounds for stopping the demonstration and as a peaceful gathering, it needed to be protected.

IRF has always seen its main task as being to facilitate dialogue between members of the public and the authorities. Members of staff and of the board of the organization are well-known specialists who have taken part in the work of the Constitutional Assembly, the Coordination Council under the President, public councils attached to various executive bodies.  Such dialogue, IRF states, made it possible to implement important elements of democratic transformation.

This however has now changed.  The blood of peaceful citizens renders any dialogue between those in power and the community impossible.

“After the brutal dispersing of EuroMaidan, we consider collaboration with the Cabinet of Ministers, the President and his Administration profoundly immoral and therefore unacceptable”.

All representatives of the International Renaissance Foundation are suspending such cooperation, and will only consider reinstating it if all those guilty of this crime against the participants of EuroMaidan are punished, and the authorities really reject violence against those who are exercising their inalienable right to freedom of peaceful assembly.

A summary of the statement here