OZON: On where the police were and weren’t on Dec 1 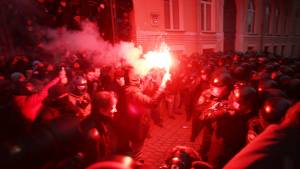 The authorities failed to safeguard freedom of peaceful assembly during the mass demonstration on Dec. 1 and concentrated police in certain areas, leaving a huge number of people with almost no officers responsible for maintaining law and order.  This is the assessment given in a statement by the civic initiative OZON whose observers were at all the relevant places on Sunday.

They particularly note the following:

2.  Instead of establishing dialogue with protest organizers and providing information and coordination for protesters, the police management concentrated Berkut riot police and internal forces around the president’s administration.  The heads of the patrol service also failed to carry out their obvious duties during such an event.  Instead hundreds of police officers were positioned around the Lenin monument (more detail here).

OZON notes that the police officers seemed lost and bemused by the situation and had not been prepared for working with demonstrators. They conclude that they had not been instructed to maintain order and ensure people’s safety during skirmishes.  The police themselves were surprised at the lack of police presence.

3. Near the Kyiv City State Administration OZON observers saw a pile of sticks, bottles with an unidentified substance, helmets and masks.  They immediately phoned the police on 102 in order to report this and to get the things removed.  The police did not react to the situation.  This failure to adequately respond requires reaction from the Interior Ministry management and the Prosecutor General’s office.

4.  Neither the Interior Ministry management, nor those of the Kyiv City State Administration [KCSA] provided information and signs to inform people about the court ban on holding peaceful protests in certain parts of Kyiv.  This meant that a large number of the protesters were accidental victims of provocation, and witnessed the provocation by a part of the (apparent) demonstrators near the president’s administration.  OZON points out that by not providing ongoing official information, the authorities made it impossible to avoid the situation unfolding with the use of force.  Most importantly, protesters were forced to identify and stop provocateurs by themselves.

5. KCSA and the Kyiv police failed to ensure that victims had access to doctors, including taking the injured to hospital and calling ambulances. They were also deprived of the opportunity of receiving first aid, access to hot drinking water, etc, and this also needs to be investigated by the officials within the ministry and KCSA responsible for safeguarding mass events in Kyiv.

OZON states that the unacceptably shoddy and unprofessional behaviour of the authorities resulted in numerous run-ins by some of the police and law enforcement officers.  It is not known how many people were injured from both sides.