OZON: On where the police were and weren’t on Dec 1No Provoking a State of EmergencyNotorious provocateur Korchynsky behind the Presidential Administration violenceBohoslavska points finger at Party of the Regions for provocationLenin between Berkut and ProvocateursDeliberate attempt to provoke disturbances?Court Ban vs President’s WordsIvano-Frankivsk EuroMaidan organizer brutally assaultedTernopil activist Volodymyr Khanas brutally beatenGrowing anger and pitiful attempts by Ukraine’s leaders to shift the blameNot Cowered: Lviv EuroMaidanPolice action incompatible with democracyBerkut violently breaks up EuroMaidanUS warns of consequences if EuroMaidan dispersedThugs attack Channel 5 film crew near pro-government rallyHromadskie.tv journalists beaten up in centre of KyivNo will to investigate harassment of journalistsNew political season brings journalists increased threats and intimidationCases of censorship and obstruction tripleTitushko and fellow assailants receive suspended sentences
• Topics / The right to a fair trial
• Topics / Freedom of peaceful assembly
• Topics / Human Rights Violations associated with EuroMaidan 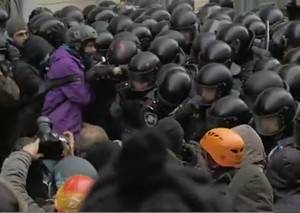 A dangerous stunt acted out by provocateurs and the Berkut riot police on Sunday outside the president’s administration on Bankova St has taken a sinister turn.  On Dec. 3, 9 men, five of them still in hospital after being badly beaten by the riot police, were remanded in custody for 2 months.  All were peaceful protesters, without masks, who seem to have had nothing to do with the confrontation between a crowd of masked young men and the riot police.  It is especially disturbing that various video clips are widely available showing some of them being brutally beaten, as well as backing allegations that the whole confrontation was orchestrated.  It is possible that the authorities are not even trying to conceal this.  The message, after all, is chilling: go out and protest and you could end up in hospital and facing a 5- 8-year sentence for “taking part in mass riots”.

The demonstration on Sunday, Dec 1 brought up to half a million Ukrainians out into the centre of Kyiv.  They were protesting against the government’s rejection of European integration but also expressing outrage at the violent dispersing of peaceful protesters early on Nov 30.

With such a huge number of demonstrators, police presence was undoubtedly called for.  Yet mid-afternoon, the civic initiative OZON began sounding the alarm.  There were almost no police on most of the central streets at all.  Demonstrators who wanted to hand over individuals caught deliberately trying to start fights, or report strange stockpiles of sticks, canisters with unidentified substances, etc, were unable to find police officers and were effectively ignored even when they rang the emergency police number.

Outside the president’s administration, however, and around a monument to Vladimir Lenin, there were huge contingents of Berkut riot police.

And lo and behold, a group of masked individuals seized a bulldozer and began heading towards the president’s administration.  They were impervious to the pleas from demonstrators to stop and reminders that this was a peaceful demonstration.  A detailed report from the police on facebook was suspiciously swift in appearing.   It asserted that 200 protesters had tried to storm a cordon outside the administration and said that 5 officers had received injuries and three had inhaled some unidentified gas. The number of injured officers was later put at 70.

Several videos can be seen of these events,   Perhaps the most damning detail concerns one of the supposed “hotheads” – a tall masked man in a purple jacket.  In the video he can be seen in various roles – first apparently fighting with the Berkut officers, then standing next to one and observing, before again changing sides.  The Berkut officers do not seem to bat an eyelid.  Other video clips appear to be showing young men, suspiciously like the hired thugs swarming the centre over recent days, being brought by coach to a courtyard on Bankova St near to the police cordon.

There were immediately suggestions in the media and social networks that the bulldozer crowd had been coordinated by Dmytro Korchynsky, captured on video near the bulldozer and described by Anton Shekhovtsov, a well-known specialist on far-right organizations as being “widely considered an agent provocateur, and his "Bratstvo" already took part in several actions that were meant to provoke police suppression of peaceful protests”.

The police even stated on Sunday evening that Korchynsky and his fringe group had been involved.  Yet they are now saying that Korchynsky himself is not a suspect, and none of the men detained are in any way connected with Bratstvo or any other political organization.  None was masked and most were at the demonstration with friends (see below).

Beaten up then arrested

Five of the men were so badly injured that they have been in hospital ever since under guard.  Oleksander Ostashchenko, an engineer, married, with a young daughter, was on Bankova St with a friend.  They both tried to get away when they saw the men in masks and police.  The friend succeeded -  Ostashchenko can be seen here  being knocked down by a Berkut officer. He is also one of the men being beaten and abused while lying on the ground and showing no resistance here.

This clearly requires objective and thorough investigation. Unfortunately the court hearings on Tuesday make it impossible to feel any confidence that the men will receive a fair trial.

The prosecutor demanded the maximum 2 month detention period on the grounds that the accused men could otherwise continue their alleged role in mass disturbances.  Most have concussion, bandaged heads and fractures which the video footage demonstrates were inflicted by riot police.

Dmytro Hnap reports that he was in court when judge Olena Radchykova remanded Yaroslav Prytulenko in custody for two months. The prosecutor claims that he was caught with a firework device and that he hit out at the officers when being detained.  This is undoubtedly undesirable behaviour, however the allegations are based solely on testimony from police officers whose names were not given, and who were not present in court.

Both the prosecutor and police refused to reveal the names of the men facing charges before the court hearings, and none have been allowed visits from members of their family.

All of this bears a disturbing resemblance to the charges laid on activists protesting against the Tax Code in 2010.  Some of those charged with causing damage to the granite stone on Maidan Nezalezhnosti [Independence Square] by erecting tents were not even part of the protest.  Then and now the calculation was brutally cynical: the more unwarranted the charges, the less likely people will be to stick their necks out. .

The outrage expressed within Ukraine and from the international community following violent measures against peaceful demonstrators on Nov. 30 forced Ukraine’s leaders to issue statements promising an investigation and claiming commitment to democratic values.  Behaviour by law enforcement bodies on Dec 1, their likely implication in planned provocation and the detention and prosecution of peaceful demonstrators indicate that the current regime will stop at little to stay in power and crush dissent.

The nine beaten by Berkut officers then arrested on Bankova St

Yury Bolotov, 39, father of two, ex-director of the rock group “Okean Elza”, at the demonstration with a friend

Serhiy Nuzhnenko, works in retail and is an avid photographer.  His friend Pavlo says that during the demonstration Nuzhnenko simply took photographs

Yaroslav Prytulenko, 21  - at the demonstration with a student friend