Maidan: "I came because I couldn’t not come" 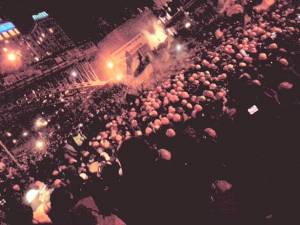 Viktor Yanukovych’s assurances on Tuesday that there would be no use of force were shown to be false some 12 hours later.  The fact that as of 4.30 there has been little violence is thanks only to the people on Maidan and their commitment to peaceful protest .

At 1.02 several thousand Berkut police and Interior Ministry troops began breaking down the barricades and moving in the direction of the Kyiv City Council.

Ukrainska Pravda writes that people sang Ukraine’s national anthem, chanted: “Police with the People” and “Together to the end”.  They also hurled snow at the police.

Well-known singer Sviatoslav Vakarchuk was among the many who heeded the call: “I came because I couldn’t not come. I was at home but when I read on the Internet about the storming, I came to Maidan”

St Michael’s Cathedral began ringing its bells, as in past centuries, to warn of danger.  Its’ doors are open as they were two weeks ago for those who sought refuge from Berkut riot police truncheons.

Facebook is full of reports that Kyiv people are on their way to Maidan and of others where people leave phone numbers, and say how many people they can provide shelter for.

According to Katya Gorchynska from Kyiv Post at soon after 5, fresh troops were being brought in, while the number of people arriving to defend Maidan steadily increased.  At present, she says, there are around 25, 000 people on Maidan.

Catherine Ashton's "sadness" seems all too diplomatic.  Yanukovych has allowed, if not directly sent Interior Ministry troops in against peaceful protesters.  The disregard for human life, for people's rights to express their protest in peaceful manner is terrifying.

As of 5.30, Gazeta Wyborcza has reported (citing Ihor Timots) that police are grabbing people heading in ones and twos to Maidan, beating them and putting them in special cars. They don’t give any reason for the arrests or where they’re taking them. The protesters are advising people to go in groups of at least 4. The police are not letting in cars coming from the other side of the river.