Record number of candidates – and clones – in problem constituenciesOld dodgy tactics again in parliamentary re-runs2013 election campaign could get dirty after VilniusElection campaign begins in problem electoral districtsCVU warns of possible vote-buying in 5 problem constituency re-runsParliament sets date for long-overdue election re-runsCVU:: Re-elections no earlier than autumn, if at allBypassing the Voters: on the Ousting of the Mayor of CherkasyWin the elections or end up imprisoned?Court enables extradition request of opposition politicianOpposition candidate arrested in Italy on extradition demandOPORA: Former parliamentary candidates are leaving the countryOpposition candidate in scandal-filled No. 94 appeals to StrasbourgOPORA: Analogous cases, different court rulingsOPORA: The Elections did not meet democratic standardsUS calls Ukrainian elections a step backwardsOSCE: Democratic progress appears to have reversed in UkraineChernenko: "These elections the worst since 2004"ENEMO notes regress compared to previous electionsInternational observers: Serious doubts about elections’ fairness
• Topics / Elections 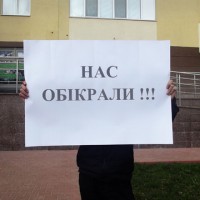 EuroMaidan and the authorities’ repressive measures against peaceful protesters have led to the re-elections in 5 “problem electoral districts” receiving scant attention   There is a certain logic to this since the selective justice and other dodgy aspects of these parliamentary re-runs highlight the problems which the EU-Ukraine Association Agreement would have helped to resolve.

Nonetheless these elections are taking place on Dec 15, and certain disturbing developments should be noted.  One of the possible winners of the 2012 parliamentary elements has, late in the day, been knocked out of the race. Viktor Romanyuk had been registered for the re-run in Electoral District No. 94 (Obukhiv, Kyiv oblast), but his candidacy was cancelled by the Kyiv Court of Appeal on Dec. 1.  The supposed justification was that he had been living in Italy for the last 8 months.  This is unconvincing since one current MP, Arsen Avakov also stood for election from Italy without being knocked off the candidate list.

Like Avakov, Romanyuk had questionable criminal proceedings initiated against him after elections many believe he won and risked being arrested if he returned in order to campaign in Obukhiv.  He is accused of attempting to steal State property on a large scale.  This, however, dates back to 2008 when Romanyuk was deputy director of the Indar insulin factory. He was not a suspect and not prevented from standing for parliament in 2012.  In those elections he was the opposition Batkivshchyna candidate and was in the lead until his main opponent, Party of the Regions candidate, and wife of the former Kyiv Regional Governor, Tetyana Zasukha, applied to the court to have the election results in some precincts cancelled.  The election watchdog OPORA noted at the time that the court was highly selective with respect to these applications.  Those examined in the presence of the media and with a protest taking place outside were rejected.  Identical applications were however allowed.  The cancellation of 30 thousand votes did not go unnoticed, and this was one of the problem districts where the Central Election Commission said that a re-run was needed.  The criminal proceedings were initiated against Romanyuk in February 2013.  Italy rejected Ukraine’s application for his extradition, just as it previously rejected the application, on no less questionable grounds, to extradite Avakov.  The latter could only return after his election gave him immunity.

The Committee of Voters of Ukraine [CVU] has criticized the High Administrative Court’s ruling which upheld Romanyuk’s removal and says that its interpretation of the residence requirement is flawed.

Flawed and highly suspicious, especially given that the removal of the single opposition candidate a mere two weeks before the elections could be expected  to have an impact on the results.

CVU welcomes the withdrawal of 47, almost certainly technical candidates but  this still leavesl an incredible 38 candidates. It is unclear whether this includes the candidate who just happened to have the same first name, patronymic and last name as the ousted candidate.  There are also 70 candidates registered in No. 223 with this including people with the same name as the most likely victors.  Such strategies are presumably intended to cause problems with the vote-count, provide convenient grounds for questioning the result, should the wish arise, and, of course, to bewilder voters.

These re-runs are in any case about anything but informed choice.  CVU and OPORA both point to attempts at buying people’s votes (in No. 194 and 223) and the use of administrative resource in support of particular candidates (the same No. 94 which Romanyuk has been stopped from standing in and No. 132.

Selective justice, bribery and the use of administrative resource are the main problems identified on the eve of the elections however both election watchdogs reported all kinds of questionable activities to get people favouring a particular party on the electoral commission.  Many members of the district electoral commissions were on the same commissions at the 2012 elections and it was their activities or failure to act during the vote count that led to the results being cancelled.

These re-elections were called when Ukraine’s leaders still appeared to be willing to sign the association agreement.  They are taking place when those same leaders have rejected European integration.  For those now asserting that the EU’s demands were too high and that the former prime minister, Yulia Tymoshenko should not have been a sticking point, the removal of Romanyuk through questionable criminal proceedings and court rulings should serve as a useful cold shower.