Observer ejected for noticing infringementsCVU: Election results already distortedEuroMaidan vs Dodgy Re-ElectionsRecord number of candidates – and clones – in problem constituenciesOld dodgy tactics again in parliamentary re-runs2013 election campaign could get dirty after VilniusElection campaign begins in problem electoral districtsCVU warns of possible vote-buying in 5 problem constituency re-runsParliament sets date for long-overdue election re-runsCVU:: Re-elections no earlier than autumn, if at allBypassing the Voters: on the Ousting of the Mayor of CherkasyWin the elections or end up imprisoned?Court enables extradition request of opposition politicianOpposition candidate arrested in Italy on extradition demandOPORA: Former parliamentary candidates are leaving the countryOpposition candidate in scandal-filled No. 94 appeals to StrasbourgOPORA: Analogous cases, different court rulingsOPORA: The Elections did not meet democratic standardsUS calls Ukrainian elections a step backwardsOSCE: Democratic progress appears to have reversed in Ukraine
• Topics / Elections

Hired thugs at all electoral districts 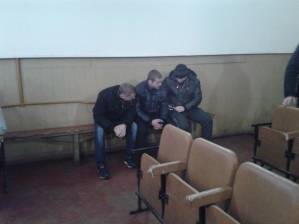 Oleksandr Chernenko, head of the Committee of Voters of Ukraine [CVU] told Radio Svoboda on Monday that vote-buying had seriously influenced the election results, mainly in Cherkasy (No. 194); in Kyiv (No. 223) and partially in Pervomaisk (Mykolaiv oblast - No. 132).  There was also a form of vote-buying through goods, rather than cash, in Obukhiv (Kyiv oblast; No. 94).  Therefore, he says, in some areas the impact was decisive, in others considerable.

He believes that there are grounds for appealing the results, especially in those districts where there is a small gap between the first two candidates, and where vote-buying was on a major scale, in Kyiv and in Mykolaiv.

Chernenko’s assessment of the difference between Sunday’s re-reruns and the original voting is disturbing. He notes that in 2012 things were more peaceful, with less infringements and says that this was because Hubsky (No. 197 – Cherkasy); Zasukha (No. 94, Obukhiv); and Pylypyshyn (No. 223, Kyiv) were convinced that they had clinched their victory before election day.  This, he says, was not with money, but through presents and the use of administrative resource.  The infringements came during the vote count when they discovered that Romanyuk (in Obukhiv) or Levchenko (in Kyiv) were ahead.  That was when all kind of force scenarios with Berkut riot police and thugs brought in.

He says that this time there was a lot of “carousel voting” (where people are taken to various polling stations and they “vote” many times), as well as the use of “titushki” or hired thugs whose presence put psychological pressure on voters and on the election commission.  There were fortunately no cases where they were used for physical fights.

Chernenko’s comment is worth noting now that the results appear to be known, with at least two differing radically from those given by exit polls.  He says “the candidates who will did indeed distort the result, not through any brute force, but through political technology.”