Add your voice against violent crushing of peaceful Euromaidan protest 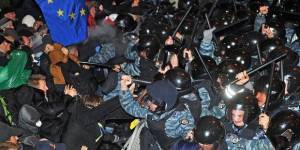 Please sign this petition calling on the President of Ukraine to ensure prompt, effective and independent investigations into all allegations of unnecessary, excessive or abusive use of force against the Euromaidan protesters.

The violent dispersal of demonstrators onIndependence Square(Maidan) in the centre of Kyiv on November 30 shows a shameful disregard for people’s right to peacefully protest. Unnecessary, excessive or abusive use of force by police against protesters on that day and on other occasions, as well as use of torture and other ill-treatment of people in custody, is a violation of citizens’ basic human rights.

Every such incident must be investigated, and every individual responsible brought to justice.

Shortly before 4am on 30 November riot police moved in on demonstrators in large numbers. They were preceded by local authority workers in trucks who were bringing equipment to erect the traditional New Year tree in the square. A Ministry of Interior spokesperson speaking on Channel 5 TV station justified the dispersal of demonstrators claiming that preparation had to be made for the New Year festivities.

According to eyewitnesses interviewed by Amnesty International, Berkut officers first told the demonstrators to disperse because the demonstration was “illegal”, then started to beat those that remained. Video footage shows Berkut officers beating protestors and in some cases pursuing men and women in order to beat them. About 35 people have so far been charged with hooliganism under the Administrative Code and dozens of people are being treated for their injuries.

We call on the Ukrainian government to:

Live up to the country’s human rights obligations and protect the right to peaceful assembly;

Ensure that prompt, effective and independent investigations are carried out into all allegations of unnecessary, excessive or abusive use of force by officers from the Berkut riot police force on 30 November and 1 December;

Make sure that those found responsible for the abuse of force on 30 November and 1 December are held accountable in criminal or disciplinary proceedings as appropriate;

Without any delay, create an effective independent mechanism for investigating complaints and all reported incidents of excessive or abusive use of force, including use of torture and other ill-treatment, by law enforcement officials.

The petition can be signed here: