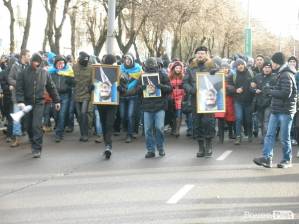 Mykola Khavronyuk, prominent specialist in criminal law and analyst for the Centre for Political and Legal Reform, is blunt in his assessment of the criminal proceedings against Maya Moskvych in Lutsk.  As reported, the prosecutor considers that the Lutsk EuroMaidan activist and five other people “denigrated” the president’s portrait.  The term “naruha” is difficult to translate because it is so inappropriate in the context,   It refers to desecration of graves, places and objects of religious or national significance, etc.

The charges are over an incident during which three portraits of Yanukovych were taken out of the Volyn Regional Council buildings during a protest against the violent dispersing of peaceful EuroMaidan protesters on Nov 30. Moskvych is supposed to have stated from a stage in the centre of Lutsk that the first portrait should be burned, the second hung on a tree, and the third handed to the crowd to lynch. She is also alleged to have damaged one of the portraits by drawing an opening around the neck and pulling a rope through it.

Khavronyuk explained to Ukrainsky Tyzhden that there is neither administrative nor criminal liability in law for denigrating the president’s portrait. The criminal code envisages liability only for desecration of a state symbol – the national emblem, flag or anthem.

While some countries, for example, Belarus and Kazakhstan do have liability for insulting the president, this is not envisaged in Ukrainian legislation. If the president feels insulted, he can file a defamation suit, he explains.

He adds that Ukraine has seen unlawful court rulings where actions linked with insulting the president have been classified as hooliganism (Article 296).  “I would stress that such rulings are unlawful as they do not comply with the general provisions of Ukraine’s Criminal Code. »

The charges laid against Maya Moskvych could carry a four-year prison sentence.

There have already been cases where police have faced criminal or administrative liability for actions linked with portraits of Yanukovych.  See Activists jailed for anti-Yanukovych graffiti and the links below.