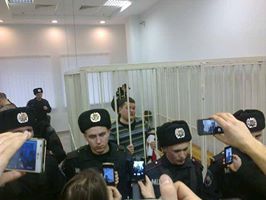 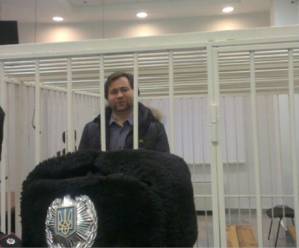 Two ominous court rulings on Friday cast in question any willingness by those in power to renounce repressive measures against peaceful protesters, journalists and lawyers representing them

The Kyiv Court of Appeal has rejected the appeals lodged both by Road Control journalist Andriy Dzyndzya and his lawyer Viktor Smaliy against 2 month detention orders.

The rulings come only a day after parliament adopted a draft bill which if signed by the president is supposed to withdraw all criminal charges against participants in protests since Nov 21.

As reported, Dzyndzya was arrested on Dec 5 and the police refused to allow his lawyer (or MPs) in to see him.  It only became clear during the court hearing the following day that Dzyndzya was accused of commandeering the bulldozer used on Bankova St in a confrontation between masked louts and Interior Ministry troops. There is considerable video footage of the events that day and no evidence to suggest that Dzyndzya was not present on Bankova St in his capacity as a journalist.  Despite this, and numerous procedural infringements, the judge, Volodymyr Buhil announced that he was remanding Dzyndzya in custody for two months.

There was protest in the court, including from Dzyndzya’s lawyer, and it is over the ensuing rumpus that Smaliy was arrested, charged with attempted murder and also remanded for 2 months.

Despite grounds for suspecting that the disturbances on Bankova St were orchestrated, and a large amount of photo and video footage,   all arrests thus far made have been of journalists and people who bore no resemblance to the masked young men seen to be causing the trouble.  The arrest of a lawyer defending one of the journalists was viewed by many as an escalation in repressive measures aimed at frightening lawyers.  The court’s ruling today cannot dispel those fears.