Kalush: criminal investigation over the burning of Yanukovych portrait 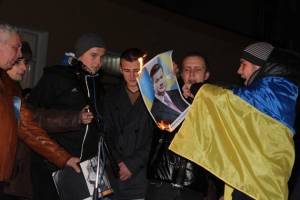 Three young men who burned a portrait of the president, Viktor Yanukovych at a meeting of the Kalush City Council have been summoned for questioning.  For the moment, they are considered witnesses, however this status is often fluid in Ukraine, as is the concept of what constitutes criminal behaviour.  As reported, there is nothing in Ukrainian legislation which per se prohibits a person from carrying a portrait of the president upside down, daubing it with paint or burning it.  This has not prevented criminal proceedings against Maya Moskvych and five other people in Lutsk over a protest action during which three portraits of the president were taken out of the Volyn Regional Council building and carried, upside down, to the centre of the city.

Now three civic activists in Kalush – Oleh Savka, Viktor Velychkovsky and Volodymyr Kushlyk – have been called in for questioning over their act of protest.

On Nov 30 an emergency meeting was held of the Kalush City Council during which the deputies passed a decision condemning the unconstitutional violent action by Berkut riot police against peaceful protesters on Maidan Nezalezhnosti in Kyiv early that morning.  They also voted for a resolution stating that no official city buildings should have portraits of Viktor Yanukovych.

The concoction of yet another criminal investigation coincided with the adoption by parliament of a bill aimed at stopping worrying detentions and prosecutions initiated in connection with the recent protests (see: Whose Amnesty?)  The law’s entry into force should put an end to the cases in Lutsk and Kalush, as well as other places where people have been summoned for questioning.  Unfortunately, the day after the draft bill was voted on, two appeals against the detention of Road Control journalist Andriy Dzyndzya and his lawyer, Viktor Smaliy, were rejected.  The accusations in both cases arouse very serious concern, and Smaliy has a young family, making the refusal to release the men on bail deeply disturbing.

It is thus too early to assume that these absurd criminal investigations will be swiftly laid to rest.  Media sources are also concerned over such investigations and uncertain of their legal permission when the police demand that they provide their photos and video footage for scrutiny.