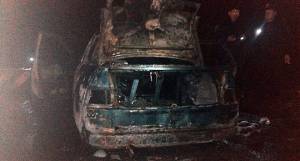 A Road Control activist has been shot and injured, and his car set alight in the latest attack on people from this civic watchdog which monitors the work of the traffic police.  Since Road Control journalist Andriy Zhukovyen was granted political asylum in the United States in November, two people closely connected with Road Control – journalist Andriy Dzyndzya and his lawyer Viktor Smaliy – have been remanded in custody for two months on questionable charges. Two others – first journalist Svitlana Malytska, and on Saturday evening Volodymyr Moralov – have been brutally attacked.  In both cases, it is clear that these were not random attacks, but directly linked to their work for Road Control.  Small wonder that the organization’s founder, Rostislav Shaposhnikov is planning to stay put in Poland,   This is an appalling record made especially chilling if we consider who might have a motive.  Over recent year’s Road Control activists’ monitoring, videoing of dodgy practices by traffic police officers and civil suits, have first and foremost riled the police.  Malytska whom the assailants called a “road whore” has produced investigations which have enabled Road Control to win over ten court cases against the Kyiv prosecutor’s office, and regional prosecutor’s offices.

The attack on Dec 21 took place around 23.00 near Shevchenko Square in Kyiv.  The assailants blocked Moralov’s car, pulled him onto the back seat.  Moralov used his own pistol, even hitting one of the two assailants but he was then overpowered and his gun taken away.

According to the Road Control press service, Moralov was dragged out of the car and then, with a gun to his head, asked where Dzyndzya lives, where his flash drive and equipment is, and about journalist Honcharuk’s whereabouts.  When he told them that he didn’t know, they shot him and burned his car.  Moralov has been taken to hospital.  There is no information about his condition.

Road Control reports that on Dec 5 when Dzyndzya was arrested, his laptop and video recorder were removed.  A couple of days later, they assert, the police created an account on YouTube and began trying to spread recordings which they believed could compromise the well-known journalist.

The organization asserts that none of the material shows any criminal behaviour, while the police have used a particular section of the video footage and the relevant headlines to try to create the impression that Dzyndzya organized the commandeering of the bulldozer used in the confrontation with Interior Ministry forces on Dec 1 on Bankova St.  In fact Road Control says,  Dzyndzya’s video footage contains clips which are extremely inconvenient for the police and prosecutor’s office and are of course not published.

As reported, Dzyndzya’s arrest and the charges against him have aroused very grave concern.  There seems to be no evidence that he was not, as he claims, on Bankova St carrying out his work as a journalist.  There is, on the other hand, plenty of video footage showing the masked louts who were in fact responsible.

During the court hearing on Friday at which Dzyndza’s appeal against the detention order was rejected, the journalist hinted that there was a copy of all the video footage. Road Control asserts that this came as a bad surprise for the police who had searched Dzyndzya’s office the day after his arrest and believed he hadn’t had time to make copies.

Road Control says that the police clearly believe that Moralov, who was on EuroMaidan, could know where Dzyndzya keeps the video recordings.  He also travelled around a lot with Road Control journalist and organizer of protest car rallies, Alexei Honcharuk, whom the police are now actively looking for.

A few days ago, it is asserted, Moralov was interrogated by the police who wanted to know where Honcharuk was and tried to get him to testify against Dzyndzya. He refused, and was released, but warned that “it’s very bad to not cooperate with the investigators”. 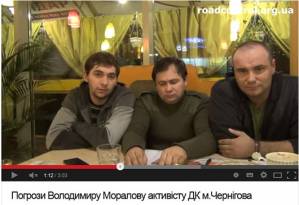 Road Control’s belief that Saturday’s attack is linked to that warning, and its other  allegations need to be verified.  It is unfortunately clear that the police will simply deny everything.  Even if that is not equally true of the prosecutor’s office, that illustrious body at present seems far more concerned with intimidating local authorities which came out in protest against the government’s rejection of EU integration and the violent dispersing of peaceful protesters on Nov 30.  Prosecutor General Viktor Pshonka demonstrated in parliament on Friday that his office is unwilling to properly investigate the offences undoubtedly committed by Berkut riot police on Nov 30 and Dec 1 and to ascertain who really issued the criminal orders to use violence against peaceful protesters.

Road Control has long annoyed the law enforcement bodies.  Over the last two years its journalists have faced attacks, dodgy criminal proceedings, including those which prompted the US authorities to grant one journalist asylum.  The events over the last two weeks look worryingly like an all-out offensive against the civic organization by those whose confidence in their own impunity makes them a danger to the public.