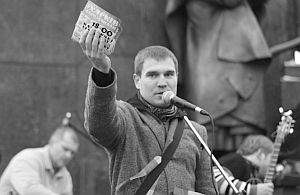 Dmytro Pylypets, a civic activist and co-organizer of the EuroMaidan protest in Kharkiv was seriously attacked on Tuesday evening at around 9 p.m.  The assailants did not demand anything and silently sprayed a gas in his face, issued blows to the head and abdomen and stabbed him.

According to opposition MP Arsen Avakov, Pylypets thankfully had the presence of mind to run out onto the road.  Although the assailants continued the attack, they were finally scared of by oncoming cars.  After waiting more than 20 minutes for an ambulance, witnesses to the attack took Pylypets to the hospital themselves.

The doctors say that Pylypets was stabbed 12 times, with the wounds between 0.5 and 2.5 cm deep. He has undergone an operation and as of around 1 a.m. is talking with investigators. 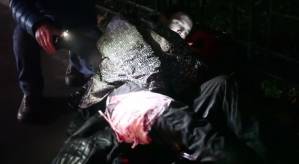 This comes in the wake of arson attacks and other offences against participants of the Kharkiv EuroMaidan.  In an arson attack at around 3 a.m. on Tuesday morning, two individuals threw a Molotov cocktail into a mini-van parked outside its owner’s place. The inside of the van was badly burned, and equipment used in the EuroMaidan protests was destroyed.

People standing in the block entrance saw what was happening and called the alarm preventing even greater damage.

The attack has been reported to the police, but the latter’s treatment of previous incidents gives no grounds for optimism.  On Dec 13 an arson attack resulted in a mini-van being totally destroyed.

The owners of the latest vehicle have asked other activists to stop collecting money for them, saying that they will not accept the money for the repairs and that any money should be collected for EuroMaidan or for people who are in more need.