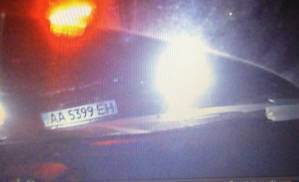 The number plate recorded during the attack on Tetyana Chornovol

Tetyana Chornovol has exposed many corrupt dealings and crimes by those holding high office in Ukraine.  It is likely she has also helped to expose the men who savagely attacked her in the early hours of Dec 25 and left her for dead.

Two men have been arrested in connection with the attack; a third has been named as wanted for questioning.  This was reported by Vitaliy Zakharchenko whose continued position as Interior Minister has been the subject of protest for the past month.

The speed with which arrests have been made is almost certainly not thanks to police efficiency, nor to the outrage expressed within Ukraine and abroad at the attack which left the 34-year-old journalist and civic activist with concussion and multiple injuries.  Chornovol herself provided the video footage exposing her assailants.  At around 1 a.m. on Tuesday morning she was driving to her home in Hora, near Boryspil in the Kyiv oblast when a car blocked her path, forcing her to the side of the road.  She fortunately managed to turn on the video register on her dashboard which clearly recorded even the number plate of the Porsche Cayenne Turbo that her assailants were driving

Zakharchenko mentions this video register, saying that “unfortunately the police were prevented from seeing the recording immediately” but still managed to identify the culprits  Top investigator, Oleh Tatarov had earlier threatened criminal charges against “certain politicians” who he alleges prevented “objectivity” through their presence at the site of the attack.  Put more simply, they removed the video register for reasons which are all too clear given the police’s lack of success - or interest -  in investigating other attacks.. The video footage itself was, however, immediately posted on the Internet.  Since the person in whose name the car is registered would seem to be one of those detained,  either the police had some other sources of information, or objectivity was in no way compromised.

Only the name of the third person has been made public, although journalist Mustafa Nayem posted information about the car and who it was registered under earlier in the day.  Despite Zakharchenko’s statement which effectively called all three men guilty, the presumption of innocence has not been revoked and the rumours circulating in the social media can for the moment be left there.  One thing, however, is clear: people willing to block the road by using an expensive sports car are not your ordinary hooligans.

As reported, just hours before the attack Chornovol had posted highly telling photos and information about Zakharchenko’s residence under the title: “This is where a butcher [literally: executioner] lives”.

On Wednesday, Ukrainska Pravda pulled no punches in an article entitled: “Yanukovych, Azarov, Firtash, Zakharchenko – who Chornovol writes about, or People whom we suspect of ordering [the attack]”

They write that each of the many people Chornovol wrote about can be suspected and add that the first people under suspicion are the Interior Minister Zakharchenko and the Prosecutor General Viktor Pshonka whose sumptuous properties she had just “visited”.  She had not had time to post the report on Pshonka’s home before the attack.

Chornovol has also played a major role in highlighting both the corruption behind the change of status and ownership of the vast estate at Mezhyhirya where the president, Viktor Yanukovych lives and thesecrecy with which Mezhyhirya is guarded from the public eye.

The morning after the attack, Olena Bondarenko, deputy head of the Party of the Regions faction in parliament issued a statement effectively accusing the opposition of having stimulated a wave of violence through the “events” at the end of November and in December.  She was clearly referring to the EuroMaidan protests following the government’s rejection of EU integration and the violent dispersing of peaceful protesters on Nov 30.  She claims that these “are now out of control and are resulting in attacks on ordinary people in their ordinary life, on ordinary streets”.

Bondarenko chose to ignore the fact that most of the high-profile attacks over the last weeks have been of EuroMaidan activists and of journalists covering the protests.  Hours before the attack on Chornovol, Kharkiv EuroMaidan co-organizer Dmytro Pylypets was also brutally attacked and stabbed 12 times.  The latest attack on a Road Control journalist Volodymyr Moralov, the second in a week, was also directed at a person involved in EuroMaidan and against a civic initiative monitoring police violations.

The problems in understanding cause and effect experienced by Bondarenko and her party cronies in high places are not shared by Ukrainian journalists, civic activists and “ordinary people” who were angered and revolted by a vicious attack on a courageous journalist.  The international community has also responded with appropriate disgust to the attack and demanded that this time a proper investigation be held.

Many joined a protest outside the Interior Ministry in Kyiv on Wednesday, more are expected on Thursday.  Their call for Zakharchenko’s dismissal is not enough, but it is surely the absolute minimum. 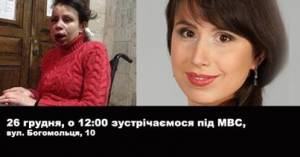 Protest outside the Interior Ministry, 12.00 on Dec 26