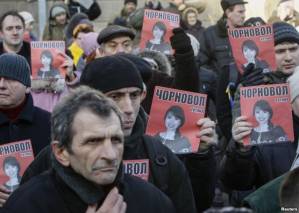 Picket outside the Interior Ministry on Thursday

There has been a lot of movement in the investigation into the brutal attack on journalist and civic activist Tetyana Chornovol, some moving in worrying directions.

A fairly positive move was the fact that the police have added to "hooliganism" the charge of inflicting serious injuries.  Considering the scale of Chornovol’s injuries, the deliberate nature of the attack and her fame as a fearless investigative journalist, any attempt to palm the attack off as hooliganism was manifestly absurd. The hooliganism charge, however, does not seem to have been abandoned, simply supplemented.

The police also announced on Thursday that a third suspect, whom they had named the previous day as 29-year-old Serhiy Kotenko, had been detained.

From here on the story becomes murkier.  On Wednesday, Interior Minister Vitaliy Zakharchenko announced that two men involved in the attack had been detained, and the third was wanted for questioning. In typical mode, no suggestion was made of any doubt in the matter.

The Porsche Cayenne identified by Chornovol’s video is registered under the name of Oleksandr Khramtsov.  It was, however, bought 6 months ago by Serhiy Kotenko.  He had apparently only paid 14 – or 17, according to the third person detained - of the 24 thousand owed, meaning that the car was still registered in Khramtsov’s name.  This leaves a substantial amount still due, placing at very least a question mark over why, if involved, he would choose to use the car so roughly and then abandon it.

There may well be other questions.

During the day on Thursday it became clear that Khramtsov has not only two friends willing to account for every moment of the time required for an alibi, but also CCTV footage from the restaurant in which they spent the time.

The other person detained, Andriy Nasikovsky, also denies any involvement, and claims he has an alibi.

Interestingly, he told journalists that both he and Khramtsov have witness status, but are worried that this could be changed.  This jars with Zakharchenko’s assertion on Wednesday evening that all three were involved in the crime.  If true, however, it would raise their incentive to provide testimony demanded of them.

Nasikovsky’s account of how Kotenko asked to stay on Tuesday night at around 1 a.m. and how he behaved strangely, is clearly suggesting that the latter is guilty.

It would be nice to feel pleased that the police are finally acting promptly in investigating one of the many attacks on journalists or civic activists, and to assume that they know what they’re doing.

Perhaps they do, but scrutiny seems especially called for following the summonses to opposition MPs on Thursday.  The ministry announced before Kotenko was detained that the “investigation had established that he was connected to certain commercial structures and owned the business which controls TVi.”  To gain additional information, three MPs had been summoned for questioning.  This supposedly is all because of a statement in the media by Kagarlovsky, the former owner of TVi who suggested that Kotenko was involved in the takeover of the channel, and that MPs Mykola Knyazhytsky and David Zhvania were connected with him.

Knyazhytsky and a third MP summoned, Vitaliy Zarema, are both from the opposition Batkivshchyna party, while Zhvania, who joined the Party of the Regions after Viktor Yanukovych became president, left following the violent dispersing of peaceful protesters on Nov. 30.

The trail seems to be leading to opposition politicians.  Or at least that is the impression that the police are trying to make with their summonses.

The Porsche Cayenne was found abandoned in the area, which was the stupidest thing that two people could do, namely Khramtsov or Kotenko.  There was a miniscule chance that Chornovol would have seen and memorized the number plate.  It was the video register that recorded this, and if people known to have a connection with the car knew of its existence, it is unclear why they didn’t simply remove it.

On Friday morning, the court hearing which was due to decide on a preventive measure with respect to Khramtsov was unexpectedly postponed, with journalists told that he had been taken away somewhere for investigative matters.  It was also reported that Kotenko’s brother had been detained.

(As of Friday evening, all four men mentioned above, had been remanded in custody for 2 months, although only Serhiy Kotenko appears to have been present in court during the hearing).

In short, watch this space…  Closely.