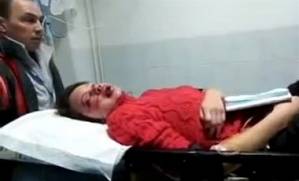 Tetyana Chornovol is in no doubt that she was attacked because of her work as an investigative journalist.  Viewers of the state-controlled TV channel UTV-1 and many other media sources loyal to the regime are likely to gain a different impression.   It is worth remembering this when we find the attempts by the police to link the attack to the opposition ludicrous.  We are probably not their target audience.

As of Saturday evening five men have been remanded in custody for 2 months in connection with the Dec 25 attack.  Only the last remains unnamed which is curious since he is the sole suspect who has apparently confessed.  He is identified as 34 and from Dniprodzherzhysnk where, the police say, he worked in a security firm.  The police report that he claims to have come to Kyiv to buy a Porsche Cayenne.

His story, if true, appears to corroborate that of Serhiy Kotenko, the actual owner of the car.  He told Hromadskie.tv that he had agreed to meet two men at 11 p.m. who supposedly wanted to buy his car, and had ended up the involuntary witness to their attack on the journalist.  It would also explain how the police identified the fifth person since Kotenko had seen a driving licence.

It would not explain why the police have arrested Kotenko’s brother, Oleksandr, nor why the registered owner of the car, Oleksandr Khramtsov and another man, Andriy Nasikovsky have also been remanded in custody.  All deny any involvement and Khramtsov’s alibi appears to be confirmed by CCTV footage.

The two people whose alleged involvement has been pushed by the police are the Kotenko brothers.  They enable the police – and UTV-1 – to suggest a link between the attack and a number of opposition MPs, including Vitaliy Klitschko and his brother.  A link in the public’s mind only, it should be stressed, since the grounds are preposterously flimsy.

On Dec 26 a police report stated that the investigators were analyzing a statement by the former owner of TVi, Kostyantin Kagalovsky that Serhiy Kotenko was involved in the seizure of TVi and that MPs Mykola Knyazhytsky and David Zhvania are linked with the activities of the suspect.“

By the next evening, Mykola Chynchyn, chief police investigator was prepared to go much further, saying that they were questioning these two MPs over possible involvement in the attack; to name three members of the opposition Udar party who had supposedly been in close contact with the men detained; and to claim a link with another opposition MP Volodymyr Polochaninov.

No reason at all is given for suspecting Oleksandr Kotenko, but Chynchyn claims that he was a member of a criminal gang which was part of another criminal syndicate run by somebody whom the Klitschko brothers supposedly had close dealings with. Vitaliy Klitschko, leader of Udar, has said he plans to lodge a defamation suit over this string of unsubstantiated accusations.

The chances of any of the allegations turning into charges are next to nil.  As with assertions on state television about the imprisoned former prime minister Yulia Tymoshenko, the aim lies elsewhere.

Since Viktor Yanukovych became president in 2010, monitoring of the taxpayer funded UTV-1 has consistently found it to be the worst offender with respect to infringements of journalist standards, distortion or muffling of information.  The channel has almost totally avoided coverage of the EuroMaidan protests which have gripped the country since late November.  It also gives no information at all about Chornovol’s work as a journalist and civic activist, including on EuroMaidan.

It pays no heed to statements made by Chornovol herself which clearly indicate that she is certain the attack was planned and linked with her investigative journalism.  In an interview given to Channel 5, for example, Chornovol suggested it could be revenge for among other things, her exposure of the new residence she says Yanukovych is having built for himself, and the residences of the Prosecutor General Viktor Pshonka and Interior Minister Vitaliy Zakharchenko.

On Dec 27 UTV-1 reports the fifth person detained, and says that the investigators are establishing who ordered the attack on the journalist.  They report Chynchyn’s words about Kagalovsky. “He asserts that Serhiy Kotenko, one of the suspects of the attack on the journalist who is also behind the raider seizure of TVi is connected with MPs Mykola Knyazhytsky and David Zhvania.  Whether they are also linked with the “Chornovol case” is what the investigators must find out. “

A brief interview is taken of Zhvania who is called an independent MP, although he voted with the ruling Party of the Regions until Nov 30 when he appears to have abandoned his support in protest at the brutal dispersing of peaceful protesters on Maidan Nezalezhnosti. Zhvania, not unexpectedly, denies knowing anybody.  The other MPs have been much more categorical in condemning attempts to link them with the attack, which is presumably why they were not interviewed.

UTV-1 lists some of the suspects and their alleged alibis and then states that in order to establish all those implicated, the investigators are demanding that MP Vitaliy Yarema (also from the opposition) hand over the cassette from Chornovol’s video register.

One detail is passed over two swiftly for the viewers to understand its importance.  “This video was handed to him immediately after the incident by the journalist’s parents”.

The voice is immediately heard of Oleh Tatarov, deputy chief investigator who calls the failure to hand over the cassette interference and threatens prosecution. He then claims that “somebody has some subjective view and doesn’t want to provide the investigators with proof of what he thinks will be uncovered, somebody who has a connection to the crime committed.”

The clear implication for those listening to this must be that the MP is trying to hide the real culprit.  The fact that it was Chornovol’s father who apparently handed over the cassette either turns this into a real horror story or indicates that he wanted to protect the information on the cassette, rather than his daughter’s assailants.

UTV-1’s news reports are so anodyne, removed from what is really happening in the country and obsequiously loyal to its currents leaders, that any person aware of Chornovol’s work as a journalist and civic activist, even if they should inadvertently turn on the channel, would have no problem understanding how misleading this report is.

The hired thugs already used by the ruling Party of the Regions demonstrated back on May 18 that they had no problems with beating up a woman.  Why arrange the use of an expensive car and possibly its prominent owner, and even obligingly abandon the car when you can do it so much more anonymously and cheaply?

The arguments seem so clear as to be banal and obvious.  A very large part of the population who have not followed Chornovol’s work are presently being fed lies or distorted information on state-run television and there is no reason to believe that they will be aware of this.