Serious doubts about the Chornovol investigation 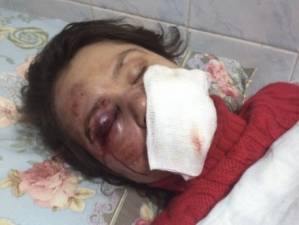 There was a marked difference in the update on the Chornovol attack investigation provided to foreign diplomats on Monday from that given to Ukrainians on Dec 27 by the same chief police inspector, Mykola Chynchyn.  Details provided by Chornovol’s husband, Mykola Berezovy, during a press briefing the same day were also omitted, although they would have undoubtedly been on interest to the representatives of foreign countries present.

Berezovy announced on Monday that his wife had recognized one of the men in the photographs which the police showed her. He was not prepared to provide any details, however the fact that only one was identified is already of interest given that five men have been remanded in custody for 2 months.

Berezovy also commented on reports about his wife’s condition following her move from the intensive care unit to an ordinary ward.  She remains in a serious state, he stressed, and said he believed the reports that she was much better and could go home for New Year were being circulated by those wishing to prevent the truth about the attack from becoming known.  He is adamant that the only way to ensure that those who ordered the savage attack are identified is to qualify the crime as attempted murder.

At present, the crime is being investigated under two articles of the criminal code: “hooliganism” (296 § 2) and deliberately inflicting serious injuries (121 § 2).  Chornovol was clearly targeted by the driver of a Porsche Cayenne who went to a lot of trouble and damage to the car he was driving to push her off the road.  Two people then got out and silently beat her around the head, before leaving her with concussion and multiple injuries in the early hours of the morning.  Whether the assailants had planned to kill her may not be clear, but this could easily have been the result, and why the charge of hooliganism is still in place is entirely unclear.

Some of the same details can be extrapolated from the chief inspector’s report to diplomats. Chynchyn explained that one of the five men detained has given “testimony from which it follows that he inflicted injuries on the victim”.  This testimony has supposedly been confirmed by an investigative experiment.

They now have all video footage, including from CCTV cameras, as well as enough fingerprint, DNA and other evidence to be certain that they have the cars involved. They have information indicating that another person was involved.  His identity is known and he is presently wanted for questioning.

Chynchyn told the diplomats that the investigators’ main task was to establish the role of each of the people allegedly involved and those who ordered the crime.

No suggestion was made of any reassessment of the involvement of the five people currently detained, although only two of those detained are believed to have been in the Porsche Cayenne.

This is particularly interesting since Chynchyn was totally silent about his own allegations that two of the detainees have links with members of the opposition, including leader of the Udar party Vitaliy Klitschko, and his brother Volodymyr.  These allegations appeared to be based on a statement made by the former owner of TVi, Kostyantin Kagalovsky that Serhiy Kotenko, the actual owner of the Porsche Cayenne, was involved in the seizure of TVi and that MPs Mykola Knyazhytsky and David Zhvania are linked with the activities of the suspect.“   That led Chynchyn to the startling conclusion that two MPs needed to be checked out for their possible involvement in the attack on Chornovol.

There was no information before and none provided on Monday to explain why Kotenko’s brother, Oleksandr needed to be arrested and remanded in custody for 2 months.  When informing the Ukrainian public, however, Chynchyn saw fit to claim that Oleksandr Kotenko has links to a criminal syndicate and an individual whom the Klitschko brothers were allegedly involved with.

The same evening, a former police general from UBOZ [the department for fighting organized crime] Volodymyr Dakhnovsky called Chychnyn’s statement a disgrace for the entire country.  The two supposed criminal gang leaders the chief inspector cited were from warring gangs.  Ignorance of that was unforgiveable. Dakhnovsky also said that the only time either of the Klitschko brothers had had any dealings with UBOZ was when Volodymyr was called in as a witness over criminal behaviour by a trainer.

It would be nice to believe that Chynchyn was silent to the diplomats about his allegations regarding the Klitschko brothers and opposition deputies because he had understood them to be unfounded.  Since the same five men remain in custody, it seems rather more likely that his address was pitched for the audience and that he correctly assessed their likely response to unsubstantiated claims all pointing in one political direction.

As reported, the fifth man detained, who is said to have confessed to beating Chornovol is 34, from Dniprodzerzhynsk and has been working in a security firm. The media report that his name is Roman Zalyubovsky.

The other men are the former owner of the Porsche Cayenne, Oleksandr Khramtsov, in whose name the car was registered.  His alibi appears to be backed not only by friends but by video footage.  He and Andriy Nasikovsky were detained the same day.

Serhiy Kotenko, the actual owner of the Porsche Cayenne told Hromadskie.tv that he was effectively tricked into allowing two men to drive his car.  He alleges that he was in the back seat of the car when the two men attacked Chornovol.

There is no information at all to explain why his brother has been detained.  This is especially important given Chornovol’s identification of only one man.  She was presumably shown photos of all five men, and if she identified any other than the fifth detainee, then why has he confessed to beating her up?

Tetyana Chornovol is well-known for fearless investigative journalism, in particular, her investigations into the corrupt set up behind the president’s residence at Mezhyhirya; the sumptuous lifestyles of other high-ranking officials.  She had just published photos of the residence of Vitaliy Zakharchenko, Interior Minister, and was planning to do the same with information about Prosecutor General Viktor Pshonka’s home.  She has also been investigating the preparations for a new residence for the president, Viktor Yanukovych, which she believes to be on an even more opulent level than Mezhyhirya.

It is obvious why the international community wishes to ensure that those who ordered this crime and those who carried it out are found and punished.  A similar level of attention to the investigations into attacks against members of the civic initiative Road Control, the Kharkiv EuroMaidan activist Dmytro Pylypets and others would be most welcome.

There is no evidence at all that the Ukrainian authorities are seriously trying to find the culprits in those cases.  With respect to the attack on Chornovol, the investigators have been extremely active. Various developments outlined above unfortunately arouse more doubts about the will to actually solve the crime than they allay.