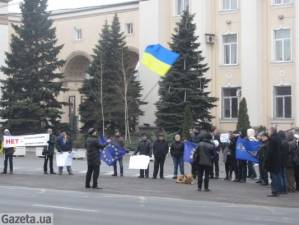 Protest outside the tax administration

Repressive measures and acts of vandalism are gaining pace in Donetsk.  Gazeta.ua reports that on Dec 31 human rights and EuroMaidan activist Maria Oliynyk’s car was smashed up with hammers.  Another activist, Yevhen Nasadyuk has been summoned to the police station, while 16 farmers from the Mariyinsk district who donated money to the Kyiv EuroMaidan and sent food to it spent the day being questioned by the tax inspectors.

The treatment of the farmers prompted around 20 EuroMaidan activists to hold a picket in protest outside the Donetsk regional tax administration.

Nasadyuk says that he spent two and a half hours in the police station explaining to the police officers what the EuroMaidans in Kyiv and Donetsk are there for.