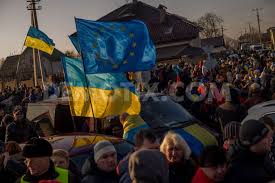 The "AutoMaidan" car rally outside the president’s residence at Mezhyhirya (Photo: Demotix.com)

Ukraine’s traffic police are as notorious as the country’s roads, and both are best avoided.  This is not an option for people taking part in the EuroMaidan peaceful protests, not only because many come to Kyiv from other parts of the country.  The traffic police have been widely used to prevent people physically reaching the demonstrations as well as to intimidate those taking part.  A new traffic police special force unit whose formation was announced on Jan 2, is likely to increase interference.

Since the “AutoMaidan” car procession on Dec 29 to the president’s controversial residence at Mezhyhirya and the sumptuous homes of others in high positions, activists and journalists who took part have had visits from traffic police officers, or have been invited in for a “chat”.  Such measures are overtly intimidating – and illegal since both visits and “invitations” are beyond the specific powers of the traffic police.   The officers’ claim in each case that they are investigating the failure of participants in the car procession to stop at the demand of police officers is also unconvincing. Even if they made some kind of general gesture calling on drivers to stop, an individual driver is only obliged to pull over if an officer specifically points to his or her car.

It is drearily predictable that these inept measures are being applied against protesters who headed for Viktor Yanukovych’s residence at Mezhyhirya.   All attempts since Yanukovych became president to hold peaceful protests near the vast estate, and to demand openness about the former state residence believed to have been privatized through questionable dealings have resulted in court bans, some administrative terms of imprisonment and informal methods of pressure.  Given that one of the journalists most active in exposing corrupt schemes, Tetyana Chornovol is still in hospital after a savage attack on Dec 25, traffic police attempts to intimidate other civic activists and journalists are doing the president no favours.

They prompt equally uncharitable thoughts about other high-ranking public officials.  The attack on Chornovol came after she posted photos of the opulent conditions in which interior minister Vitaliy Zakharchenko lives, and before she had a chance to post similar photos of the residence of the prosecutor general, Viktor Pshonka. The probable attempt on her life came just days after a second potentially fatal attack on representatives of the traffic police watchdog Road Control.  These coincided with two criminal prosecutions on preposterous charges against Road Control’s Andriy Dzyndzya and his lawyer Viktor Smaliy.

Instead of measures to find those guilty of the above-mentioned attacks, an equally serious assault on Kharkiv EuroMaidan activist Dmytro Pylypets and others, the police have responded by organizing a special force unit, probably formed from the previous COBRA unit.  The latter was frequently exposed by Road Control which asserts that its purported role of catching officials as well as their privileged offspring was purely nominal, and in fact they stopped ordinary drivers, falsified evidence and extorted bribes.

The new unit announced on Thursday will work from Jan 1 to 31 in Kyiv and the Kyiv oblast.  “The measures will activate prophylactic work aimed at preventing accidents; reducing the consequences of road accidents; and countering unlawful activities linked with the use of vehicles.”  As with the use of Berkut riot police, the deployment and functions of this new unit are regulated by a minister’s order, not a law which would at least have to be considered by parliament and be subject to public scrutiny.

If the aim were seriously to avoid accidents, there would be no reason to use a special force unit and every justification in extending the actions to cover the entire country.  It is small wonder that Road Control, together with EuroMaidan activists, assume that this is yet another method to intimidate and crush the pro-EU EuroMaidan movement.

The techniques have been used widely over the last four years.  Road Control is correct to advise people of their rights however the methods are often more insidious.  Traffic police can make it clear to transport companies that they will encounter difficulties in the future if they carry protesters.  Or they can scrutinize the car or people’s documents until they find something, or claim to have.  Such methods often work, and it seems likely that their frequency will increase over the next month.

On the other hand anger remains intense at the government’s use of force against peaceful protesters, at the increasing number of attacks on civic activists and other repressive measures.  The regime is resorting to its standard methods of pressure.  Their effect, however, is much less predictable.