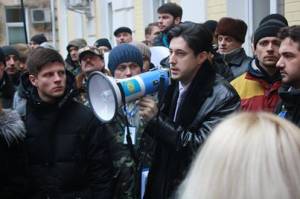 Yaroslav Prytulenko’s lawyer, Vitaliy Kasko addressed the large number of people who came to show support for his client.  He stressed that Prytulenko had not even been arrested on Bankova St where the disturbances took place, that he was thrown to the ground and beaten by police, and only later charged with taking part in mass disturbances.  As reported, it seems likely that Prytulenko’s continued detention when 8 others detained have been released from custody is because he sustained less injuries.  Most of the Bankova Prisoners were seriously beaten by Berkut riot officers, and required hospital treatment.

Four men remain in detention on dubious charges linked with the EuroMaidan protests.  All should have been released by today, Jan 4, in accordance with the “amnesty law”.

On Friday, the court hearing in the case of Yaroslav Prytulenko was adjourned after minutes. The reason is highly indicative: the prosecutor’s representatives didn’t turn up and the judge deemed this to justify postponing the hearing until Jan 8.  Since the amnesty law needed to be applied within 10 days of its coming into force (Dec 26), there was no justification at all.

The prosecutor’s absence demonstrates that the will needed to make even a shoddy law work is entirely missing.

Please see: New Year in Prison for Peaceful Protest  for brief details about each of the cases.

In an interview to the Deutsche Welle Ukrainian Service, Mykola Kozyrev, Head of the Ukrainian Helsinki Human Rights Union called all four men political prisoners and the failure to release them in breach of the amnesty law.