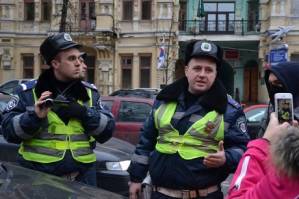 Allegations by the police that a traffic police officer was hit and injured by a EuroMaidan car rally driver on Jan 3 warrant close attention. This case and similar attempts to fabricate criminal charges over the last week or two could render all stern words about likely sanctions if the Ukrainian authorities continue to use violence against peaceful protesters largely meaningless.

In Soviet times the authorities learned to avoid unpleasant publicity for persecution of dissidents by fabricating criminal charges – the less socially acceptable, the better. The rape of a young woman from Zhytomyr allegedly committed in a EuroMaidan tent was widely reported on Dec 30, especially in the Russian media, but treated with incredulity and seemingly forgotten.  The allegations against Yevhen Nasadyuk, a Donetsk artist and EuroMaidan activist, of corrupting a minor led to his being detained by police on Dec 31 but may well run up against the insurmountable problem of finding his supposed victim and proving any contact.

The alleged injuries to a traffic police officer also stretch credulity, but are harder to disprove.  According to a number of witnesses at the scene near the Golden Gate in Kyiv, a traffic police inspector walked up to a car driving at low speed, and fell, pretending to have been hit by the car.

EuroMaidan SOS reports Irina Zakatova as saying that she was in the car behind. “I couldn’t believe my eyes. The inspector rubbed up against the car, then in theatrical manner fell (even writhing in convulsions).  My first thought was that he was drunk”.

According to the police report “one of the participants in “AutoMaidan” hit a traffic police officer and left the scene of the incident. The police officer had gone up to the Toyota, however the driver made a sharp manoeuvre, dragged the traffic inspector several metres along the pavement and drove off to the Golden Gate. There the driver jumped out of the car and vanished.”  The report says that the car belongs to a limited liability company and they are investigating who was at the wheel.  Ukrainska Pravda reports that the initial police report claimed that the driver had jumped into another car and vanished, however by Jan 4 this detail had disappeared. 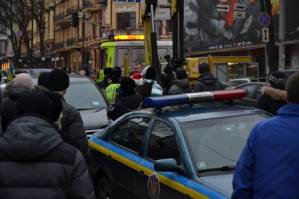 If the witnesses are to be believed, the new information is also worryingly improbable.  By Saturday the police were claiming that the 36-year-old officer was in hospital and that the doctors had found medium severity injuries – a closed chest injury, bruises to the knee and spine.

As reported, there has been resistance to attempts to force hospital and ambulance staff to provide information about the injuries sustained by peaceful protesters on Nov 30.  Medical workers have on a number of occasions complained of being under pressure to provide falsified medical reports, and it is not inconceivable that the same pressure has been applied in this case.

Judging by the prosecutions still underway, despite an amnesty law having been in force since Dec 26, the courts are also likely to bow to pressure.  The only evidence against three of the four men still in detention on charges linked with the disturbances on Bankova St on Dec 1 is worse than flimsy yet judges have refused to release the men from custody.  In the fourth case, protest in court has led to extraordinary charges against Road Control lawyer Viktor Smaliy of having attempted to murder the judge.

The questioning of Oleksandr Chyzhov, a Kharkiv EuroMaidan activist, over alleged circulation of pornography, should also send alarm bells ringing.  Similarly preposterous charges against Dmytro Groisman, coordinator of the Vinnytsa Human Rights Group dragged on for three years and probably contributed to his premature death in April last year.

None of these cases attract as much media interest as the violence meted out to peaceful protesters on Nov 30 or the attack on journalist and civic activist Tetyana Chornovol.  In those cases, the right noises were made, together with some arrests or dismissals, and it seems increasingly unlikely that more will be done to uncover the real culprits.  A number of other attacks have effectively not been investigated at all.  Such impunity, as well as the above-mentioned prosecutions, are just as overtly aimed at quashing peaceful protest and no less of a threat to the country’s development.

Boris Danik’s assertion that sanctions would not achieve much can be disputed, however it would be difficult not to agree that other action is also needed.  The effect of international blustering about sanctions if and when the regime resorts to further violence will not help those who are currently facing prosecution, violence or other forms of pressure for continuing to assert their right to EU integration and the future they want for themselves and their children.  It is not at all guaranteed that firm and vociferous reaction to each and every attempt to drag Ukraine back into a Soviet past can help, but it is surely worth trying.