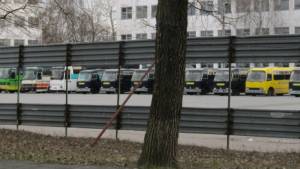 Serhiy Sabov, one of the activists involved in blocking the departure of coaches carrying special force Tiger officers from Vasylkiv to Kyiv during the night from 9 to 10 Dec has been classified as a suspect in criminal proceedings and summoned for questioning on Jan 8.

Ukrainska Pravda reports Sabov himself as saying that he is facing charges under Article 279 ¶ 1 of the Criminal Code (blocking transport), as well as seizing a transport enterprise.  This could carry a sentence of up to 3 years imprisonment.

He accuses the authorities of using the subservient prosecutor’s office and police to put pressure on him and other activists of the Vasylkiv EuroMaidan who took part in picketing the Tiger unit which he says is illegally posted in Vasylkiv.

The Vasylkiv City Council deputy (from Udar) calls the placing of the unit in the city, on territory of the Defence Ministry, a flagrant violation of Ukraine’s Constitution and legislation.  He is also demanding punishment for those Tiger officers and their management involved in unlawful action with respect to picketers. He says that physical force was used against them and their property damaged.

On Dec 10 the people who were blocking the exit of the special force unit were driven off and around 15 coaches full of officers set off for Kyiv.   and the officers enabled to leave.  The protesters tried to block the coaches on the Odessa road, but to no avail.  Their car were dragged away and tyres let down.

The police claimed that the coaches were carrying interior ministry forces (conscripts) to Kyiv “to replace staff”.

During the night from 10 to 11 December the authorities brought interior ministry forces into the centre and attempted to disperse EuroMaidan.  This was despite EU and US top officials being in Kyiv and the president, Viktor Yanukovych having personally assured them that no further violence would be used.  The bells of St Michael’s Cathedral began ringing as in centuries past to warn of danger, and the message sped through social networks that people were needed to protect Maidan.  By early morning, there were many thousands on Maidan, and the authorities eventually backed off.