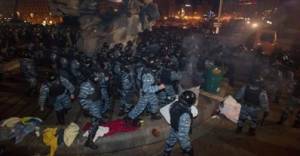 No further information is provided.

Amid angry calls from within Ukraine for the government’s dismissal and president’s impeachment, as well as international condemnation, Viktor Yanukovych dismissed the head of the Kyiv City State Administration, Oleksandr Popov and deputy head of the National Security and Defence Council, Volodymyr Sivkovych. The Prosecutor General, Viktor Pshonka said that some other police officers involved that night were suspected of abuse of power.

There seemed no particular reason for the two dismissals, and in fact rumours were rife that it was Andriy Klyuev, head of the National Defence Council who had given the order to use Berkut special force riot police..

In mid December Pshonka claimed that his office had not ascertained who ordered the action and which officers were involved.

Kyiv’s District Administrative Court on Dec 23 did allow a civil suit demanding that the Interior Ministry provide the orders and other documents regarding the use of Berkut officers, but rejected applications to force information from the Prosecutor and medical services regarding the events of that night, the nature of the injuries nearly 100 people sustained, etc.

More details can be found here: No answers over Nov 30 brutal dispersing of peaceful EuroMaidan

Video and photographic evidence as well as the accounts of witnesses confirm very grave violations of the law regarding the use of force against peaceful protesters.  They also give the lie to assertions made by Pshonka, the Interior Minister Vitaliy Zakharchenko and others.

Events during the day before the violent dispersal clearly suggest that the measures were planned.  They were feared by many, not least because similar moves had been used against the Tax Code Maidan in Dec 2010 (see Police action incompatible with democracy)

Unacceptable violence by individual Berkut officers must clearly be punished, however the question goes much further.  The use of Berkut was in itself unwarranted and therefore in breach of Ukraine’s legislation.

Finding this or that officer to accuse of exceeding his powers seems aimed only at imitating a real investigation.  Unfortunately there is nothing to indicate real will by those now in high office to carry out a proper investigation into the use of specially trained officers who used truncheons against entirely peaceful protesters, some of whom were asleep when their offensive began.