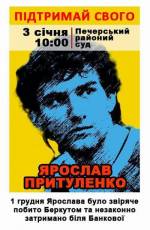 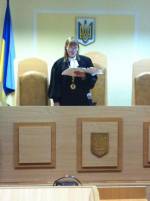 In a move which makes a farce of the recent amnesty law, a court in Kyiv has heeded objections from the prosecutor and refused to release Yaroslav Prytulenko, one of the 9 “Bankova Prisoners”, detained following the Dec 1 disturbances on Bankova St.  21-year-old Prytulenko is the youngest of the nine men whose detention on charges of organizing mass riots provoked outrage and 2 Amnesty International urgent actions.  He was also the least injured by Berkut riot police.

None of the men detained bore any similarity to the masked louts who provoked a confrontation with interior ministry forces and five were so seriously injured by Berkut officers that they were brought to the court from hospital beds.  Neither these injuries, which in at least three cases were inflicted by Berkut on men lying on the ground, nor the lack of any evidence, prevented the judges from issuing near identical rulings remanding all men in custody for 2 months.

Since those detained included one journalist, Valery Garagutz and eight people who seemed like any of the other peaceful protesters on EuroMaidan that day, the arrests appeared aimed at sending a clear message to peaceful protesters.

The protests did not abate, and a week later the president, Viktor Yanukovych spoke of the need for a roundtable.  The first attempt at such, on Dec 10, was more of a tea party with Ukraine’s former presidents.  During it the president announced that he was asking the Prosecutor General to consider whether some of the detained men could be released pending trial.  Not all, he stressed, and the charges were not being dropped.

Within two days all but one of the original prisoners had been released, although three other men – two connected with the beleaguered police watchdog Road Control – had been arrested and also remain in custody.

Yanukovych did not explain why he was not asking for all the prisoners to be released.  There is absolutely no reason to believe that this was due to any information he possessed about the cases.

Even the declared reasons for Prytulenko’s continued detention are pitiful. He was  wearing protective clothing which a young man into extreme sports is more than likely to do and he supposedly had a bottle with petrol; a shock pistol; and a knife in his backpack, although this is disputed.  There is nothing else against the young man.

There was nothing against any of the 9 men, and plenty of evidence, including video footage, to suggest that the Berkut riot police who appeared after the louts vanished simply beat up anybody unable to get out of their way.  It is surely significant that the person who remains in custody is the one whose youth and relative lack of injuries least incriminates the police officers.

Yanukovych’s tea party preceded a seemingly important legislative move, namely the adoption of an “amnesty law” aimed at revoking all criminal charges brought against people involved in the protests from Nov 21 to Dec 26, when the law came into force, after being signed by the president.

The bill “On removing adverse effects and preventing persecution and punishment of people as the result of the events during peaceful gatherings” was hailed as a victory by the opposition who insisted that it would only apply to peaceful protesters, not to those law enforcement officers implicated in the violent dispersing of protesters, particularly on Nov 30.  Despite being supported by all parties except the communists, and being signed by Yanukovych on Dec 23, initial muted criticism became vociferous as soon as it became possible to apply it.  There were worrying claims from pro-presidential Party of the Regions representatives that the law also applied to police officers, and statements from high court judges that the law was supposedly too vague to be applied and that there were no mechanisms in place to implement it.

Since these arguments were precisely those used on Jan 8 by the prosecutor and accepted by Pechersky District Court judge Khrystyna Hladun, it would be well to note the assessment of this same law given by Mykola Khavronyuk, a prominent criminal law specialist and research director for the Centre for Political and Legal Reform.  While agreeing that the bill is flawed, he stresses that it remains a law which was supported by a constitutional (two-thirds) majority in parliament.  Its aim, he says, is clear, as are the legal mechanisms available to the prosecutor and the courts to terminate the relevant criminal proceedings.

Many Ukrainian laws are expressed in terms which make them dangerously susceptible to whatever interpretation is found convenient.  The present situation with the amnesty law seems especially cynical, with lack of clarity being used to justify total non-enforcement of the law.  President Yanukovych would do well to consider the impression this creates, given his role initially in the release of “some but not all” of the Bankova Prisoners, and the apparent synchronization yet again between earlier criticism of a law already adopted and the position taken by prosecutor and judge in refusing to release Yaroslav Prytulenko.