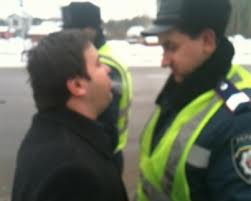 Andriy Dzyndzya, journalist from the civic police watchdog Road Control has been informed that he is suspected of a new “offence” over an incident a year ago when he spat in the face of a traffic police inspector, with this supposedly injuring the officer.

As reported, Dzyndzya is currently in detention facing extremely worrying charges over the Dec 1 disturbances on Bankova St in Kyiv.  Although there is considerable evidence corroborating Dzyndzya’s assertion that he was there in a journalist capacity, he is accused of involvement in the commandeering of the bulldozer brought to Bankova St and used in the confrontation with interior ministry forces.  All video footage, as well as reports from reputable NGOs monitoring the events, suggest that the trouble outside the president’s administration on Dec 1 was deliberately orchestrated, and that those chiefly responsible were young masked louts.  Those arrested, however, were two journalists, an activist of the AutoMaidan movment, and eight men of different ages, almost all of whom were badly beaten by Berkut riot police.

The charges against Dzyndzya clearly fall under the amnesty law which came into force on Dec 25, and his continued detention is therefore in breach of the law.

If this new charge has been brought in an attempt to justify his continued imprisonment, the investigators are almost comically off track.

No mention has yet been made of other criminal charges which appeared to be hanging over Dzyndzya last year.  This reticence is less likely to be because the charges are also questionable, and more because the other Road Control journalist -  Andriy Zhukovyen – who was presented with criminal charges after being assaulted happened to be in the USA at the time. He decided it was dangerous for him to return to Ukraine and was granted political asylum in November 2013.

Road Control reports that on Jan 8, Dzyndzya learned of charges over the “offence” allegedly committed almost a year ago, on Jan 23,  2011.  At 10.30 that day he is accused of having spat in the face of traffic police inspector Oleksandr Mukha, resulting in the latter being hospitalized with light injuries.

A forensic medical assessment from the following day stated that Mukha was found to have an injury “in the form of a bruise”.

The charge presented on Thursday by senior inspector B. Yavorsky deserves to be shared in full:

“In this way A. Dzyndzya, through his deliberate actions reflected in the inflicting of light bodily injuries on a law enforcement officer who was carrying out his official duties, committed the crime set out in Article 345 § 2 of the Criminal Code ».

Road Control asserts that the conflict between Dzyndzya and Mukha arose over the traffic officer’s attempt to “illegally take a car away to a private car impoundment park” which Road Control says brings the interior ministry management millions in profit.  According to Road Control, Dzyndzya spat on Mukha, while the latter knocked Dzyndzya to the ground and hit him several times.  The leaders of Road Control arrived at the scene, together with the Kyiv traffic police management, and the conflict was resolved, with both men agreeing to waive their claims against the others.  By that evening, however, it was announced that Mukha had been hospitalized.  Road Control claims that the news caused mirth all around the country and that the traffic police went silent.

There are now conflicting views of this somewhat specific crime.  It is highly likely that Road Control videoed the incident in question, as it usually does.  It is also indisputable that for almost a year the investigators were silent on the subject.

Until now when the amnesty law has come into effect and the will to enforce it remains lacking.