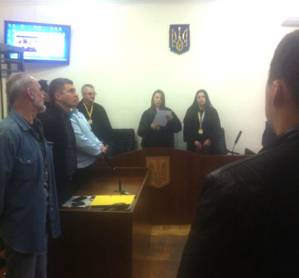 By leaving AutoMaidan activist Volodymyr Kadura in detention, another Kyiv court has refused to apply the amnesty law passed by a constitutional majority and in force since Dec 25.

The refusal this time was by presiding judge Maryna Antonyuk and two other judges from the Shevchenkivsky District Court in Kyiv.

The grounds (if any) provided are not clear, however the ruling comes just two days after Pechersky District Court judge Khrystyna Hladun refused to release another Bankova prisoner, Yaroslav Prytulenko, supposedly because the law was “vague” and could not be implemented.  Prytulenko is one of the nine men originally detained, most after being severely beaten by Berkut riot police.  All nine, including Prytulenko, have been the subject of Amnesty International urgent actions.

As reported, the grounds given then suggest close coordination with the Party of the Regions even though its MPs voted for the bill.  The refusals to release people clearly falling within the scope of the amnesty law would seem to suggest that the bill was voted on and then signed into law by the president in bad faith.

Kadura is a businessman and activist of the AutoMaidan protests (car drivers in support of EuroMaidan) and was arrested together with well-known Road Control journalist Andriy Dzyndzya.  Even without the amnesty bill, the charges against both men arouse deep scepticism.

Kadura is accused of having driven the bulldozer brought to Bankova St during the EuroMaidan demonstration on Dec 1.  As reported many times, there are very strong grounds for believing that the stunt with a bulldozer and aggressive behaviour by a crowd of young largely masked louts was orchestrated. Despite the fact that notorious provocateur and leader of “Bratstvo”, Dmytro Korchynsky can be seen on video footage near the bulldozer, no attempt was made to detain him.

Instead the arrests have been of two journalists, one from Road Control; the Road Control lawyer defending him; an AutoMaidan activist, and 8 men who were badly beaten by Berkut riot police while at the demonstration as peaceful protesters.

More details about the arrests and savage attacks on Road Control activists and journalists here: Full-Frontal Offensive against Road Control  and on attempts to bring other charges against Dzyndza here.