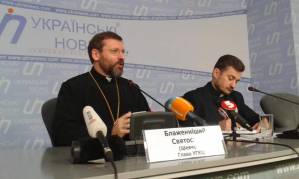 The Ministry of Culture has accused the Ukrainian Greek Catholic Church of religious activity which it claims to be in breach of the law and has threatened to terminate its activities.  The letter, received on Jan 6, was presented by the head of the Church, Major Archbishop Sviatoslav at a press conference on Monday.

The letter refers to reports in the media about activities by representatives of churches, in particular the Ukrainian Greek Catholic Church [UGCC] throughout December and at the beginning of January which it asserts are in breach of the law on freedom of conscience and religious organizations.

It claims that the continuing erection of tent chapels, public religious services, religious ceremonies and processions “can have a negative impact on trust between the state and the church and religious organizations as a whole, on peace and harmony in society and the religious community.”   It cites Article 21 of the law on freedom of conscience as allowing prayer services, religious rites, ceremonies and processions without permission only in "religious buildings, on adjacent territory, places of pilgrimage, apartments or homes of citizens, as well as some other places (cemeteries, funeral venues and crematoriums)".   This, it should be noted, is overridden by the Constitution which demands only that the authorities are notified of peaceful gatherings, not that they provide permission.

The letter concludes with an overt threat of court action to remove UGCC’s registration, thus preventing its activities.

Major Archbishop Sviatoslav notes that “for the first time in all the years of Ukraine’s independence, there has been a warning which could even be called a threat that religious communities of the UGCC could be stripped by the courts of their legal status.”

“We thought that the days when the Church was persecuted had long passed”.

He explained that the reason for this threat is that some of the clergy are among believers who have spontaneously joined peaceful protests.

“We have always been and will remain with the people - this is the heart of the Church. We have never encouraged or blessed unlawful activities.”

He stresses that the Church calls on people to obey the law of the land, as well as God’s law.  It encourages believers to be active participants of the social process. “The Church does not take part in political life, however it is an inalienable part of civil society”.

“We are convinced that praying for peace together with those who are peacefully expressing their wish to live in a law-based country is an appropriate place for prayer. No permission is needed from a state authority for this”.

This is not the first repressive action by the authorities against the Church.  As reported, Father Mykhailo Dymyd, who has been ministering to members of the Lviv EuroMaidan, received a visitation from the traffic police at the beginning of January. They claimed  that he had failed to stop at the demand of a traffic officer somewhere in the Kyiv oblast.