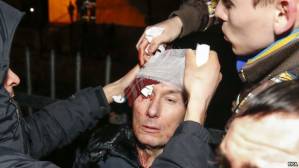 Radio Svoboda reports that on Jan 13 the Interior Ministry used its video footage as well as that of other media, editing the material as it pleased and adding its own additional text in an attempt to incriminate the opposition.

It says that the video clip shown on Monday to foreign diplomats in Kyiv was of the events on Jan 10-11 and the clashes between Berkut riot police and protesters outside the Svyatoshynsky District Court and police station.

A voice beyond the screen in the police video put together from footage from various media sources claims that “the sentence was passed on a terrorist group which was planning to carry out an explosion in a crowded place in Boryspil”, while the members of the VO Svoboda party who arrived at the court are called “fighters”.

The video claims also that former Interior Minister and political prisoner Yury Lutsenko who was badly beaten by Berkut officers was probably drunk and threatened one of the heads of the special force unit.  The police also deny that police officers caused Lutsenko’s injuries.

This commentary is diametrically opposite to the accounts of protesters, journalists as well as Lutsenko (and his wife) who say that they were beaten by Berkut officers.

On Monday MP Iryna Lutsenko refuted the claims and said that her husband had drunk any alcohol that day.

As well as the video footage from Radio Svoboda, the police used a video from the newspaper Den, the Russian channel ITV.ru and footage from unknown sources.

During the protests which followed the passing of sentence in the flawed and controversial “Vasilkiv Terrorist” case, dozens of activists, journalists and 3 deputies were injured outside the court, and later outside the Svyatoshynsky district police station.

The most prominent of the injured was Yury Lutsenko. As reported, Iryna Lutsenko asserts that her husband had endeavoured to stand between the Berkut officers and protesters in an attempt to prevent bloodshed.   He sustained numerous injuries and concussion, and is still in hospital.

Please see 6 year sentences in surreal Vasylkiv “terrorist trial” http://khpg.org/1389380286 for details about the trial which provoked the protests.