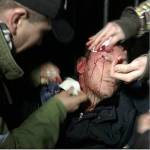 The police have claimed that there was no footage of the incident and denied that Berkut were involved.  They also alleged that Lutsenko had been inebriated.  This is denied by his wife.  The chief doctor’s statement on TSN news on Monday that alcohol had been found in Lutsenko’s blood seems questionable, given that Lutsenko was only examined the following day.

Both Radio Svoboda and the newspaper Den have complained that the police took their video footage and effectively doctored it, adding commentary before showing their version of the events to foreign diplomats on Monday.

The video footage has been made public by Hromadskie.tv, but can be seen here

As reported, the conflict took place during the evening and night from Jan 10-11 following the guilty verdict handed down in the notoriously flawed “Vasylkiv terrorist” trial.

MP Iryna Lutsenko reported at the time that she and her husband had been trying for an hour to get the truth out of the Berkut officers about their plans.  They had demanded to see the officers’ documents and that they remove their masks.  The officers refused and they got out of the coach, though people outside continued to demand that they show their ID and take off their masks.

Instead, she says, the Berkut officers began beating people.  Her husband then tried to get between Berkut and the protesters in order, he hoped, to prevent bloodshed.  They began beating him and only stopped, she asserts, when he lost consciousness.

See: 6 year sentences in surreal Vasylkiv “terrorist trial” for details about the trial