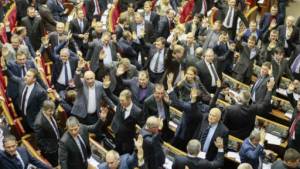 A draft law “passed” in full by the ruling majority in parliament on Jan 16 criminalizes libel, labels and restricts civic associations receiving foreign grants as “foreign agents” and imposes and substantially increases liability for any forms of protest.  If the draft bill is signed by the parliamentary speaker Volodymyr Rybak and president, Viktor Yanukovych, it will set Ukraine’s democracy back by years.

The bill was registered on Jan 14 by Party of the Regions MPs Volodymyr Oliynyk and  Vadym Kolesnichenko. The latter is well-known for legislative initiatives which ape the worst offensives against democracy in neighbouring Russia.  This law is no exception.

The number of sheer procedural infringements is simply staggering.  The draft bill “On amendments to the Law on the Judicial System and Status of Judges and procedural laws on additional measures for protecting citizens’ safety” has not passed through any profile committees or parliamentary hearings.  There have been no assessments or legal analysis, and it was voted on straight after the budget law, without any discussion. There was no electronic record of voting, effectively only a show of hands with no real attempt to count the actual number of votes, and a strong likelihood that MPs recorded as having voted for the law were in fact absent (this being in breach of the law and Constitution).

Just over a year after mass protest forced the Party of the Regions to back down over plans to criminalize libel, these plans have been “adopted” via a law which was effectively slipped into parliament.

The bill introduces Article 151 “Libel” to the Criminal Code.  This establishes criminal liability for “deliberately circulating knowingly false information which denigrates the honour and dignity of another person.  While the penalty for this is a fine, or maximum corrective work for up to one year, the fine for libel in the media or Internet is considerably higher, from 50 to 300 times the minimum monthly wage before tax.

“Libel linked with accusations of committing a serious or particularly serious crime are punishable by corrective work from 1 to 2 years or restriction of liberty for up to 2 years.

While this bill does not, as it stands, propose imprisonment for libel, it is a clear offensive against freedom of speech.  Its immediate targets are easily guessed, given the protests over the violent dispersing of peaceful protesters on Nov 30, the savage attack on investigative journalist Tetyana Chornovol and others.  With the courts in Ukraine increasingly subservient, all it will take is for a court ruling to formally absolve those widely suspected of liability for any public allegations against them to become criminally punishable “libel”.

Kolesnichenko has, as usual, taken Russia as his model, for a particularly regressive step.

The draft bill passed in full only two days after being introduced increases regulation of the work of civic organizations in Ukraine.  It introduces amendments to the Law on civic associations, including the concept of “a civic association which fulfils the function of a foreign agent”.

This applies if the organization “in order to ensure its activities receives money or property from foreign states, their state bodies, NGOs of other states, international NGOs, foreign citizens, stateless persons, or persons authorized by them who receive money or other property from the above foreign sources, and also takes part, including in the interests of foreign states, in political activities on Ukrainian territory”.

Such organizations will be obliged every quarter to post on the Internet or public in an official newspaper a report on their activities.  All material aid received will be liable for corporate tax.

The law also deems civic organizations (other than political parties) as those taking part in political activities if they take part (including through financing) in the organization and holding of political protests.

Lest anybody be under any illusions about what this law is designed to prevent, “political actions” are specified as those “which are aimed at influencing decision making by state bodies, a change in the state policy which those bodies have defined, as well as forming public opinion for those purposes”.

The first clauses of the bill propose amendments to the Code of Administrative Offences which are clearly directed at imposing large penalties on peaceful protesters.  Article 122 is to be supplemented with a fifth paragraph which states: “movement by a person driving a vehicle in a procession made up of more than five vehicles without agreeing the conditions and procedure of movement with the relevant division of the Interior Ministry in charge of traffic safety which created obstructions to traffic should be punishable by a fine from 40 to 50 times the minimum wage before tax, or the stripping of the person’s licence for a period of between one and two years with the confiscation of the vehicle, or without this.”   There are some seriously steep increases in fines.

It should be noted that since the AutoMaidan car procession to outside the president’s controversial residence at Mezhyhirya and other high-ranking officials’ sumptuous residences on Dec 29, the traffic police have been actively pursuing drivers who took part.  The fact that the car procession broke no laws has not stopped the traffic police, nor unfortunately Ukrainian judges, who have already stripped drivers of their licences for up to 6 months.

Other restrictions include penalties up to 15 days imprisonment ("administrative arrest") for putting up tents or wearing masks or helmets during a demonstration.  Considerably longer periods of imprisonment could be imposed for blocking official buildings; seizing buildings or blocking roads and transport.

The amendments to Article 185-1 of the Code on Administrative Offences allow for up to 15 days imprisonment for organizing a peaceful protest which does not comply with “established procedure”.  There is no such established procedure which should mean that the norm will lie dormant. Instead, however, it is likely to refer to whatever document the local authorities decide should constitute such procedure, with one favourite being a decree from Soviet times (1988).   Paragraph 2 of this article imposes liability on business or organization leaders for supporting peaceful protests which somebody deems to not comply with this same “established procedure”.  The penalty here is up to 10 days imprisonment.

If this new law comes into force, all such legitimate peaceful protests will become unlawful since there is no likelihood at all that they will be “agreed” with the authorities.  This means that any AutoMaidan car procession or similar, containing more than 5 cars, will automatically be in breach of this appallingly repressive law.

“Extremist material should be understood as documents in paper, electronic or other forms, intended for publication, which contain information of an extremist nature. That is, they call for, justify or argue in favour of the need to carry out activities to plan, organize, spur people to prepare or carry out actions aimed at a violent change or overthrow of the constitutional order, encroachment on the territorial integrity, inviolability, sovereignty of the state; the violent seizure or retention of power or authority; unlawful interference in the activities or obstruction of the legitimate activities of the authorities, bodies of local self-government  , others in authority; call or argue for or justify the need to stir up social, racial, national, ethnic, language or religious emnity and hatred; hold mass disturbances; disrupt public order; hooliganism and acts of vandalism out of social, racial, national, ethnic, language or religious emnity and hatred ; infringe the rights, freedoms and legitimate interests of people, including direct or indirect restriction of rights or establish direct or indirect privileges for a person and citizen on the basis of race, skin colour, political, religious or other views, gender, ethnic and social original, financial position, place of residence; on the basis of language or other factors; propaganda of exclusiveness and superiority, advantage or lower value of a person (social group) on the basis of their social, racial, national, ethnic, language, religious affiliation or attitude to religion”. …. “

"Interference in the work of the courts"

This is interpreted as circulating information about a judge which is of an “overtly offensive nature and demonstrates disrespect for the judge and justice system for the purpose of revenge, obstructing the judge from carrying out his or her official duties or in order to achieve a wrongful ruling. The penalties range from a fine to up to 2 years imprisonment.

This will almost certainly include information of public significance such as the fact that the new president of the Constitutional Court, Viacheslav Ovcharenko was the head of the court which “lost” the documents about Viktor Yanukovych’s convictions and prison terms, or that his watch cost 27 thousand dollars.

It could include details about the lifestyle, promotion etc of Rodion Kireyev, young judge who passed sentence n the politically motivated prosecution of Yulia Tymoshenko.  This and similar success stories for the prosecutor in the Tymoshenko trial are of undoubted public importance.  The reasons why such “secrets” might be jealously guarded are all too clear.

Oksana Yefimchuk and Yury Krainyak from the law firm Jurimex explain that now all Internet providers will need to undergo licensing procedure.  Experience of how the National Broadcasting Council does this suggest that it will be easy to refuse requests for a licence for no reason whatsoever.

All Internet media have to be registered as information agencies, with fines imposed if they don’t register.  Internet sites can be blocked without a court order on the basis of a decision from the national commission for state regulation regarding communications and automated systems.  This commission will be able to block access to sites “which circulate information, the circulation of which is against the law.  The latter is to be determined by an “expert” with no proper specification of the criteria for either such experts or what information must not be circulated.

The scope is enormous for asserting that the circulation of any information is unlawful. The Jurimex lawyers point out that if a photo which shows a particular person is taken during a journalist investigation and then posted on the site, it will be possible to legally close the site.

The law also forces all cable communications and Internet providers to purchase and install equipment for secret interception of information.

More details can be added to the above list of direct threats to democratic rights contained in this bill adopted with grave infringements on Jan 16.  It is a gravely retrograde step with serious repercussions for all Ukrainians.