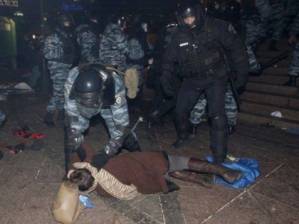 Among the “laws” adopted by the ruling majority during a gravely flawed parliamentary vote on Thursday was one which expands the amnesty law to cover those guilty of beating peaceful protesters and journalists on Nov 30, Dec 1 and other occasions linked with the EuroMaidan protests.

The draft law was registered by Party of the Regions MP Serhiy Kivalov as Amendments to the Law on removing adverse effects and preventing persecution and punishment of people as the result of the events during peaceful gatherings.

As reported, the law was originally hailed as an achievement by the opposition since they had supposedly overcome resistance from the ruling Party of the Regions and passed a law which waived liability only for those involved in the actual protests, not the Berkut riot police and other officials guilty of, for example, the savage beating of peaceful protesters on Maidan Nezalezhnosti on Nov 30.

It then became entirely clear that the law was not being enforced (see: The President’s Bankova Prisoners).

The law may or may not now be applied, as intended – to remove charges brought against peaceful protesters.  It does, however, free from criminal liability people suspected or accused of obstructing journalists carrying out their duties (many were badly beaten), of exceeding official powers, etc (the only charges so far initiated against officials over the violence on Nov 30.).

The law did not receive enough votes at first attempt.  The speaker then proposed trying again, which the MPs during this extraordinary parody of a parliamentary session voted for by hand.  The second time, 229 MPs were counted as having voted for the bill as a base, then 236 voted for it in full.

Despite the gross procedural infringements over this bill and the others supposedly adopted on Thursday, there are reports on Thursday evening suggesting that the president Viktor Yanukovych has already signed them into force.