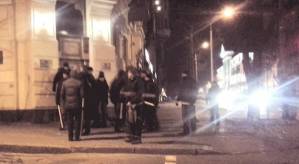 EuroMaidan activists are asking all journalists and others in the centre of Kyiv during this second night of unrest to take care and to take photos.  Both are needed because of large numbers of “titushki or hired thugs swarming the centre.  There were reports throughout Monday of large numbers being brought into Kyiv..  Press Secretary to Vitaly Klitschko, opposition Udar Party leader,  Oksana Zinovieva reported on facebook at around 3 or 4 a.m. that opposition Udar Party leader Vitaly Klitschko had caught two “titushki” who said that they had been  brought to Kyiv from Kherson, with the task given being to smash cars, shop windows, pick fights and cause disturbances

Further fuelling suspicions regarding coordination between hired thugs and the police, Korrespondent.net reports that at the same time that the titushki began their rampage, Berkut riot police tried to storm the barricades on Hrushewsky St hurling stones and stun grenades.  They were apparently deflected, but it seems at least likely that the trail of smashed cars, etc, might later have been presented as the reason for the offensive

At around 3 a.m. on Tuesday morning, EuroMaidan SOS put out a message asking people to photograph or video how the thugs were smashing cars and attacking people.  The brazen nature of their behaviou gave grounds for fearing attempts by the police to pin these actions on EuroMaidan protesters.

This will not be the first time.

The situation is considerable more tense and violent than at the beginning of December, however there are obvious analogies with the disturbances on Bankova St on Dec 1.  On that occasion, the disturbances began in the only areas of the centre where there were police or Interior Ministry forces cordons.  Despite many hundreds of thousands of protesters and almost no police to be seen, the main part of the demonstration that day passed off without any trouble.

The events outside the president’s administration were caught on video and clearly showed the involvement of Dmytro Korchynski who, together with his marginal Bratstvo movement, is known for provocations aimed at causing police crackdowns.  He was not, however, declared on the wanted list until after he had had time to go into hiding or abroad.

Instead those detained included 9 men almost all of whom were badly beaten by Berkut riot police and who bore no resemblance to the masked thugs on all video footage.

The net was then widened to include a Road Control journalist Andry Dzyndzya and then his lawyer, Viktor Smaly and an AutoMaidan activist Volodymyr Kadura.

The latter three, and one of the original detainees, Yaroslav Prytulenko, remain in custody.  (see: The President’s Bankova Prisoners)

The original trouble on Sunday, Jan 19 on Hrushevsky St may also have been deliberately orchestrated, although that is not entirely clear given the role undoubtedly played by the Pravy Sector organization.

There appear to be grounds for believing that at least some of the 31 people already detained are EuroMaidan activists taking no part in disturbances.

There is every reason to be careful  - and to try, without attracting attention, to photograph or video everything seen.