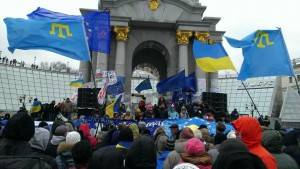 Artem Chiyhoz, deputy head of the Mejlis of the Crimean Tatar Peoplei informs that hundreds of Crimean Tatars are heading to the capital of Ukraine.  He says that groups are constantly setting off to join the protests and that the next 5 or 6 coach-loads will be leaving in the near future.

Asked if they are worried about the new anti-protest laws which have now come into force, Chiyhoz answered: “That didn’t frighten us during Soviet times. We have been through all that. For us our freedom and our rights are more important”.

Another member of the Mejlis, Yehiz Abduraman, stressed that this main representative body of the Crimean Tatar  people has taken part in EuroMaidan from the outset and will continue to do so, both in Kyiv and during the protests in Simferopol.

On Jan 21 the Mejlis issued a statement demanding that an extraordinary session be called of the Verkhovna Rada in order to cancel the laws passed on Jan 16 which restrict people’s rights and liberties.  The Presidium of the Mejlis of the Crimean Tatar people, faithful to the principle of non-violence which is the basis of the Crimean Tatar national movement, calls on all Ukrainian citizens, all nationalities in the Crimea to stand up in defence of civil rights and liberties.”

The Mejlis’s demands echo those made by a large number of organizations in Ukraine, the EU, USA and others.

Information about the main dangers of these laws can be found here: Parliamentary Titushkism and in the links below that text.