More AutoMaidan activists have been found in Kyiv police stations following the events of Wednesday night which singer Ruslana has called “brazen and unconcealed terror on the streets of Kyiv.”  Chillingly it is now well over 24 hours since any contact with Dmytro Bulatov, one of the leaders of the AutoMaidan movement.  The police claim to know nothing about his whereabouts.

With repressive measures escalating since the Jan 29 AutoMaidan car procession to the president’s controversial estate at Mezhyhirya, Bulatov has been in hiding.  Until Wednesday evening, he had, however, kept in contact by telephone, so this prolonged silence is worrying, especially given the offensive against AutoMaidan activists launched seemingly in coordinated moves by Berkut and titushki [hired thugs].

At around 4 a.m. on Thursday morning, Berkut officers, probably together with titushki, detained AutoMaidan activists who were patrolling Clinic No. 17.  They smashed up the cars and detained all those in the cars.  According to one young man who managed to escape, they threatened to take them away and beat them. 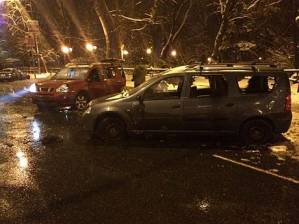 In an open letter regarding the events, Ruslana notes that according to the accounts of AutoMaidan activists who came under attack, the Berkut officers’ behaviour was of an unprecedentedly aggressive nature.  “It was effectively impossible to even talk with them – they behaved like unconcealed bandits deaf to any appeals.”  Ruslana adds that they believe that the officers involved may have been from “our northern neighbour”, i.e. the Russian Federation.

Both Ruslana and earlier EuroMaidan SOS reports speak of a grenade having been thrown into a minivan carrying the detained AutoMaidan activists.  They had been transferred to the second vehicle, seemingly to try to get other AutoMaidan activists off their track, and it was into the second vehicle that the grenade was thrown.  Ruslana says there are reports that two people in the minivan may have been serious injured when the grenade exploded.

These, and similar reports, need to be checked, yet it is difficult to know how.  The police only responded with an “apology” when a shocking video showing Berkut and other officers stripping an activist naked in freezing temperatures and videoing him was posted on the Internet.  In all other cases, the Interior Ministry, together with minister Vitaly Zakharchenko, deny all accusations, frequently claiming that they are “provocations”.

A number of AutoMaidan activists were finally located in custody in various police stations.  Most had clearly been beaten.

One of the activists, Oleksandr Kravtsov was found in the Obolon dstrict police station.  His wife, the poet Olesya Mamchyn, says that he has obviously been beaten but is in a reasonable state.

The court hearing is due to begin at 8 a.m. on Friday morning.

Given the repressive legislation signed into force by Viktor Yanukovych, as well as later cabinet of ministers  resolutions, published on Jan 23, there are no grounds for optimism about the court hearings.  It is unfortunately quite safe to assume that the judges will not throw out any charges, whether of “hooliganism” or worse, to justify prosecution of peaceful protesters who answered an apparent call for help from a clinic.  Even before the repressive laws were whipped in, judges had already stripped drivers of their licences for up to 6 months over spurious charges linked with the car procession to Mezhyhirya.  A court hearing has just been postponed in a similar punitive measure against Father

We should not forget the chilling context to this call for assistance, as well as to concern over the continued inability to find Dmytro Bulatov.  The funeral is taking place in Lviv on Friday of Yury Verbytsky, a peaceful protester who was abducted from hospital, together with civic activist and journalist Ihor Lutsenko.  His badly beaten body was found on Jan 22 in the Boryspil forest.