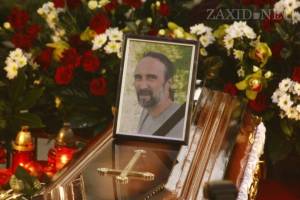 On Jan 24 thousands of people in Lviv attended the funeral of Yury Verbysky, a Lviv seismologist and EuroMaidan protester whose mutilated body was found in the Boryspil forest outside Kyiv on Wednesday.  He had been abducted from the Oleksandrov hospital by unidentified men, together with the well-known journalist and civic activist Ihor Lutsenko.

Whoever is behind his death, it is clear from Lutsenko’s account that he was particularly badly beaten because he was from Lviv.  The current regime has been assiduously pushing dangerously primitive stereotypes of people from Western Ukraine, and particularly Lviv, as being “Bandera supporting”, which is generally accompanied by words like “facist”.

The following is from a   issued on Friday

In a separate incident, on January 21, at about 4 a.m., a Maidan activist, Igor Lutsenko, 35, accompanied another activist, Yuri Verbitsky, to Oktyabrsky Hospital to seek treatment for an eye injury. Several minutes after Lutsenko and Verbitsky arrived at the hospital, a group of 7 to 10 men dressed in civilian clothing stormed into the hospital, struck both men, twisted their arms behind their backs, and dragged them to a minivan, Lutsenko told Human Rights Watch.

Lutsenko said his captors kept him on the floor of the minivan while they drove for 20 to 30 minutes. When they arrived at a forest, the assailants removed both men from the car, forced them to their knees, and beat them, while asking general questions about who they were and what they do.

After about an hour, the captors drove Lutsenko and Verbitsky to a shed, took Lutsenko inside, put a bag over his head, twisted his arms behind his back, and made him lie on the floor.

Lutsenko told Human Rights Watch that while he was on the floor of the shed he could hear Verbitsky being beaten, screaming, and moaning nearby outside.

At one point several men entered the shed and beat Lutsenko for about 30 minutes, while asking questions such as how decisions are made at Maidan, who financed the movement, what Maidan activists were planning for the coming days, who controls the Right Sector – a nationalist movement – and who the “radicals” are at Maidan. About five or six hours later, by Lutsenko’s estimate, the men returned and questioned and beat him again.

Lutsenko said that between the first and second rounds of questioning, his captors carried in a man and put him on the floor next to Lutsenko. He could see only through the slits in the bag on his head, but judging from the fragments of clothing he could see, he believed the man was Verbitsky. They did not speak, Lutsenko said, but he could hear the other man breathing. About 30 minutes later, the captors took the man away.

Between one and two hours later, Lutsenko said, his captors drove him to another wooded area, freed his hands, and left him. Lutsenko was eventually able to free himself and seek help.

Lutsenko is in a hospital being treated for a concussion, broken teeth, multiple hematomas, open wounds in the soft tissue of his right leg, and other injuries.

On January 22, Verbitsky’s body was found in a village in the Kiev District. A preliminary hospital report said he died of hypothermia. No other information was available about any injuries he sustained.

Several factors pointed to the possibility that the abductors were in collusion with law enforcement and security services, Human Rights Watch said. The captors at one point told Lutsenko that once his ordeal was finished, he would be taken to a police station. Lutsenko also said his kidnappers seemed well organized, operated in a hierarchy, and focused their questioning on the antigovernment movement.

The Ukrainian authorities have opened a criminal investigation into the kidnapping and Verbitsky’s death. The investigation should be independent and effective and should include any evidence that points to government collusion, Human Rights Watch said. Those responsible should be brought to justice.

“The abduction of both men, leaving one seriously injured and the other dead, needs a comprehensive and transparent investigation, ” Gorbunova said. “One way to ensure that this won’t happen again is for the authorities to make clear that those responsible will be brought to justice.”