Police together with “titushki” in Dnipropetrovsk and Zaporizhya 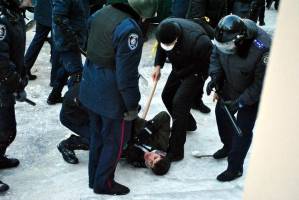 Damning video footage, corroborated by eye witness reports, suggests that during protests in Dnipropetrovsk on Sunday, the police and local authorities worked in close cooperation with a large number of “titushki” of hired thugs.   There are grounds for believing the same scenario to have been followed in Zaporizhya.  This collaboration makes the large number of people detained in both cities of particular concern.

On one of the videos https://youtube.com/watch?v=HRtBJNYwUIw#t=21  a group of athletic-looking young men, most with their faces masked and hoods, are inside the Dnipropetrovsk regional administration.  They can be seen standing at a long table, then moving towards the exit holding sticks and bats.  Some are also carrying the same shields used by law enforcement officers.

The video footage was apparently shot before the attack on protesters outside the administration who were demanding the resignation of the regional governor and expressing solidarity with EuroMaidan. Soon after the thugs exited the building, fights began with several people, including journalists, being injured.

Some of those injured have gunshot wounds from shock pistols, which witnesses assert were inflicted both by titushki and police. .

Liga.net reports that on Sunday several thousand people gathered outside the regional administration despite attempts by the police to block the protesters’ path.  Among the many reports on social networks is one from a former police officer who expresses shame for former colleagues who were defending a motley bunch of thugs in masks, armed with bats, sticks and stones.  It was the titushki, he says, who provoked the attack on the regional administration.  “The police defended them with incredible ferocity, using water cannons against people in temperatures of minus 15, as well as tear gas. The titushki meanwhile hid behind the Berkut riot police, hurling stones at people and shooting with shock pistols.”

The version posted on the Interior Ministry website is quite different.  The police claim that they stopped an attempt to storm the regional administration, that they detained 37 people, did not use any special means or shock pistols.  They assert that the mobile telephones of the people detained have text messages offering 600 to 800 UAH for taking part in the protests.  According to their report, 18 police officers were injured.

None of this bears any resemblance to the videos available and to witness testimony.

Discrepancies, hard evidence and sheer incongruity have unfortunately not stopped the prosecutor and judges over recent months from remanding people in custody on manifestly flawed charges.  Until earlier on Sunday, the most grotesque example was the remand in custody for two months of an elderly man with only one fully functional arm on suspicion of having “assaulted” Berkut officers.

Since witnesses have reported seeing titushki beat up protesters after which police arrived and arrested their victims, the minimum 37 arrests in Dnipropetrovsk and 50 in Zaporizhya may bring new squalid records in cynical abuse of the law and of people’s right to peaceful protest.