Vaad Ukraine condemns efforts to use anti-Semitism for political gainAnti-Semitic MindsetsDangerous “antifascist” cardThugs assault journalists while police look onOn the danger and cynicism behind the “anti-fascist” events planned for 18 MayUses and abuses of far-right electoral gains in UkraineDangerous AllianceDividing TacticA High price for disillusionmentFor those who couldn’t returnThe Limited Force of Fine WordsTerrible DeceitTrial by HeadlineOthersWithout labelsOn the situation with anti-Semitism in the context of civic protestAnti-Semitism on EuroMaidan: Not seen, just heard aboutPanic in Ukraine the work of provocateursArson attempt on Mykolaiv SynagogueBabyn Yar bombed by Russia, 80 years after Nazi Massacre of Ukrainian Jews
• Topics / Politics and human rights
• Topics / Freedom of conscience and religion
• Topics / Interethnic relations

Anti-Semitism as a Weapon of Political Technology 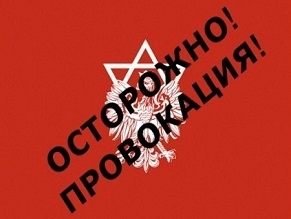 The Ukrainian political confrontation caused by the refusal of the government to take steps towards integration with the EU, and then the unprecedentedly cruel dissolution of peaceful protests, has reached its peak in January. At least five participants of the protests have been killed, hundreds, if not thousands of demonstrators have been wounded by the police and hooligans, while dozens of policemen have also been injured. The fact that there are among the protesters radical nationalists inclined towards violence, and that the authorities hire armed thugs to attach demonstrators – which has been proven numerous times and is no secret in Ukraine – creates the impression on the external observer of an uncontrolled, bloody chaos. Making any sense of the situation, separating rumours from facts and political technology fakes from reliable information is extremely difficult. Even more so, since the propaganda campaign accompanying the street confrontations has seen the use of the entire range of the political technology arsenal, including the most dirty tricks. A common currency in the confrontation has been the ‘Jewish Question’.

It should be noted that the authorities have on several occasions used the topic of anti-Semitism to discredit the opposition. The topic is convenient for several reasons. First, from time to time the opposition has in fact given quite real reasons for accusations of politically incorrect statements. Over the four years of Viktor Yanukovych’s presidency, practically the entire political spectrum has united against his regime, including the nationalist radicals. The experience of the parliamentary elections of 2012 taught the opposition that internal contradiction and lack of unity are bigger obstacles on the road to victory than falsification and bribing of voters on the part of the authorities. But the authorities have also drawn conclusions: if they carefully discredit the weak link in the opposition coalition, then they can either provoke the separation of moderate forces from radical ones, and as a result split their enemies, or, if the opposition continues to carefully keep up the appearance that all is well, then use anti-Semitism to discredit the opposition as a whole. Although accusations of anti-Semitism are not considerable obstacles in the way of winning electoral sympathies in Ukraine, the West approaches the topic with great sensitivity. Influenced by a Soviet conspiratorial mentality, many of the authorities’ strategists are entirely convinced that the protests are funded by the West, and see it as their task to break this support. For this reason, such propagandist campaigns are aimed partly, if not entirely, at external observers.

Having understood the trap perfectly, even the most radical oppositionists, even those who are, by all appearances, genuine anti-Semites, like some leading figures in the Svoboda Party, have deliberately avoided any controversial statements. However, the cynicism of the political technologists is great enough, and the stakes high enough, for the authorities to initiate incidents that the state’s loyal media can link to the opposition. One previous, similar campaign included the distributing of provocative anti-Semitic leaflets supposedly from Svoboda (but to which, of course, that party had no connection), personal threats against Jewish political and social activists, and the appearance at opposition rallies of paid sportsmen/thugs (in Ukrainian political jargon known as ‘titushky’, in reference to the name of the first such mercenary whom it was possible to unmask) wearing t-shirts with the slogan ‘Beat the Yids! Svoboda’, and so on. I was afraid that the affair would extend to attacks on synagogues or even physical violence against Jews, carried out supposedly in the name of the opposition – but thankfully it didn’t, for a number of reasons; the aim of this spring campaign was to provoke condemnation of anti-Semitism in Ukraine from the international community (which, unfortunately, was achieved through the efforts of professional, paid lobbyists who are prepared to gather signatures among parliamentarians for any cause).

The constant use of unjustified and extreme violence against peaceful protesters has led to the mobilization of of those most able to physically resist – nationalist radical groups that are even more decisive and committed than the parliamentary Svoboda Party, which has deliberately tried to avoid escalation of the conflicts. However, the protesters, unsurprisingly, have not demonstrated any anti-Semitism – the Jewish question has not interested them in the slightest (manifestations of anti-Semitism from the other side, among the members of Berkut or forces supporting the authorities, have been no less, and possibly more than among protesters). Among the tens of thousands of speeches made on the Euromaidan ‘yids’ were mentions in a negative context only once, at an ‘open mic’ event during the performance of an amateur poet, Diana Kamliuk. One could also mention the carnivalesque character played by the Svoboda MP and well-known cultural activists Bohdan Beniuk in the specific context of the Christmas ‘vertep’, or nativity play on the stage of the Maidan, during which the folk image gained a new incarnation: the ‘Jew’, who in the end appears as a positive figure, joins the nation in resistance against the tyranny of Herod. The speeches of the leader of the Jewish community, Josif Zissels, rabbi Hillel Cohen, the group Pushkinband, which plays songs in Yiddish, were met universally with the genuine support of tens of thousands of demonstrators.
However, as we have seen previously, if the opposition gives no real reasons for accusations of anti-Semitism, they can be initiated. In comparison with the spring situation, the level of tension in society has grown hugely, and leaflets will no longer bother anyone. I was thus not surprised when I found out about a series of attacks on Jews attending the synagogue in the Podil area of Kyiv. Chronologically, they coincided with the adoption of the packet of repressive laws, which under the noble pretext of fighting extremism and xenophobia in essence placed all kinds of protest outside the law. At the same time, a new campaign to accuse the opposition of anti-Semitism also began – as far as I can tell, on exactly the same day as the laws were adopted. The attacks were directly connected to the activities of the civilian protesters (as though the protesters, all fascists and anti-Semites, had waited especially for two months until the adoption of the new laws to start their attacks against Jews – precisely at the moment when the Maidan was bracing itself for an imminent storm by the police). Unfortunately, this campaign was joined by some Jewish organizations, some real, and others invented by the political technologists for this precise purpose. Due to the deliberate financing of the spreading of these bogus organisations’ panicked objections in the media, their voices were clearly heard in Israel, the USA and Europe. News about the entirely real and quite large-scale rally of solidarity with Ukraine and in memory of victims of political repressions that took place in Tel Aviv reached a far smaller audience than did the hysterical statement, filled with invented ‘facts’, of one non-existent Jewish organization, which appealed to Israel to save Ukrainian Jews from a new Holocaust…
I am an academic. In contrast to political technologists and provocateurs, I’m not accustomed to throwing accusations around, and without enough confirmed facts I cannot say for sure who is behind the anti-Semitic attacks of the last two weeks in Kyiv. However, there is a certain coincidence of related information – beginning with the complete synchronization of the attacks, the adoption of the repressive new laws and the start of a new stage of the propaganda campaign, and ending with the fact that there is now a good deal of proof that the authorities have recruited neo-Nazi activists (from the Kharkiv and Donetsk regions) to carry out physical attacks on activists of the protest movement. Analysing this information, I am inclined towards the explanation that these attacks were provocations organized by the authorities.